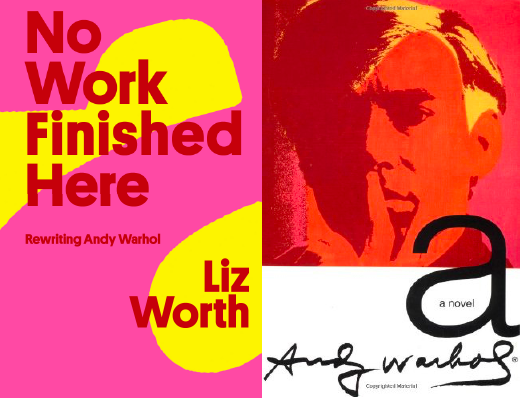 BookThug is proud to present Liz Worth’s fourth book, a collection of poetry titled No Work Finished Here: Rewriting Andy Warhol. No Work Finished Here is a reworking of Andy Warhol’s a, A Novel, published in 1968 and based on interviews recorded in Warhol’s Factory over a two-year period. The “novel” is made up of unedited transcripts of these conversations, with over a hundred voices appearing on the tapes. Recorded at late night, drug-induced Factory parties, the original tapes were full of disjointed and frenetic, but often poetic, conversations. Transcribed by four different typists, the style of the novel fluctuates based on who was transcribing. At 451 pages, the novel’s disorderly style perfectly captures the overall atmosphere of Warhol’s Factory.

Page from Andy Warhol’s a, A Novel

Liz Worth first read a, A Novel in 2004, during “a major Warhol phase,” but found the novel “jagged, as transcriptions tend to be.” Yet, amid the amphetamine-fuelled and sometimes incoherent dialogue, the beautiful lines and haunting statements called out to her. She began posting the remixed poems on her blog in 2013, and set a goal of appropriating only the original text and turning each page into a unique poem every day. Eventually, Worth was having such a good time that she began posting two poems per day, and the project was completed within one year. She never intended for the blog project to be turned into a book, but her agent helped her to see this possibility. True to Worth’s style, the poems in No Work Finished Here: Rewriting Andy Warhol hiss and pop with confessional whispers while maintaining the raw, distorted qualities originally captured on tape and documented in a, A Novel.

Warhol and some of the regular visitors to his Factory

Meet The Factory Cast and Characters
All those who appear in the novel use thinly veiled nicknames.
Drella is Andy Warhol, using a nickname created by Lou Reed, who refers to Warhol as being a combination of Cinderella and Dracula. Warhol wanted to be distanced from the novel, but is often mentioned by others.
Ondine is Robert Olivo, a Warhol superstar and actor. a was originally intended to be 24 hours in the life of Ondine, but it was transformed into a two-year project.
Gerard Malanga’s real name is used in the book, and he was an actor and artist who worked closely with Warhol.
Taxi is the nickname of Edie Sedgwick, a model and film star.
Lou refers to Lou Reed of The Velvet Underground.
The Sugar Plum Fairy is Joe Campbell, a film actor.
Lucky L is Paul America, the star of the film My Hustler.
Paul refers to Paul Morrissey, who went on to direct some of Warhol’s later films.
Billy Name is Billy Linich, a photographer and designer of the Factory.

“Liz Worth’s collection of poems is a testament to both her artistry and daily discipline. In an age of diminished attention, her perseverance in daily poem—making by mining the same source over and over reminds us that artists can be a model of life without distraction-how to go deeper and deeper until you find yourself looking back at you.” —Heath Allen, composer of Andy, A popera

“What if you tore apart the city’s tenderloin; if you seized its ephemera and — before burning all the sweet voodoo — collected the best, and most brilliant cuts?  This is Liz Worth’s stylish master-nightmare, No Work Finished Here. This is ‘the start of something true.’”—Lynn Crosbie, author of Where Did You Sleep Last Night

Liz Worth is a Toronto-based author. Her first book, Treat Me Like Dirt: An Oral History of Punk in Toronto and Beyond, was the first to give an in-depth account of Toronto’s early punk scene. She has also released a poetry collection called Amphetamine Heart and a novel called PostApoc. You can reach her at lizworth.com, on Facebook (www.facebook.com/lizworthbooks), or Twitter @LizWorthXO.

No Work Finished Here by Liz Worth is now available for purchase. Learn more here.