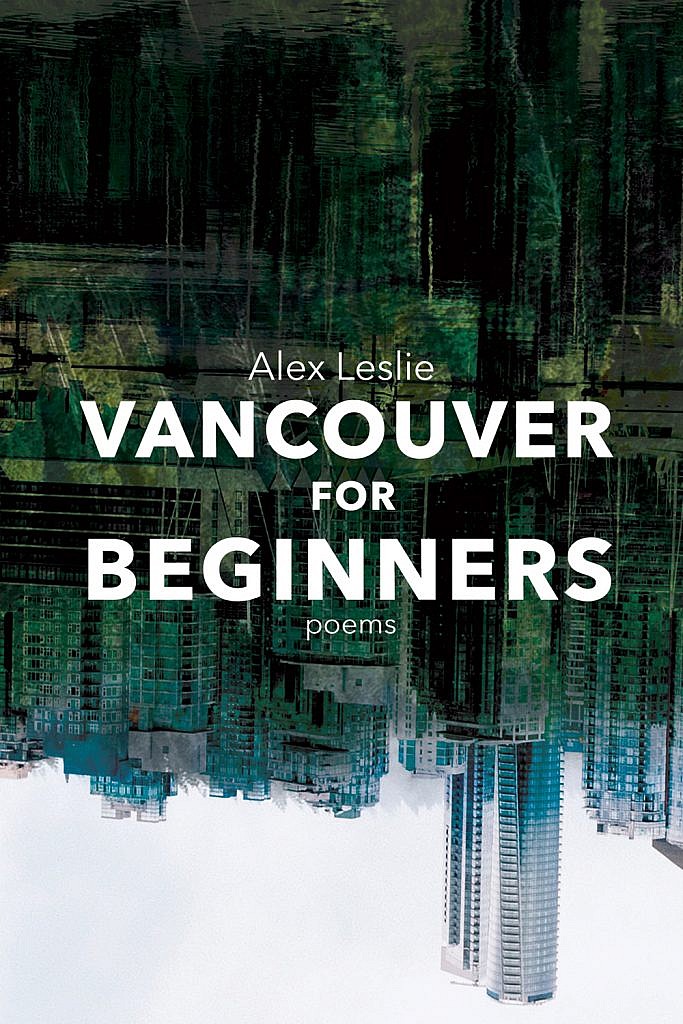 In Leslie’s latest book, Vancouver for Beginners, a finalist for the 2020 Western Canada Jewish Book Awards, the nostalgia of place is dissected through the mapping of a city where readers are led past surrealist development proposals, post-apocalyptic postcards, childhood landmarks long gone, and a developer who paces at the city’s edge, shoring it up with aquariums. In these poems you will traverse a city lined with rivers, not streets. Memory traps and tourist traps reveal themselves, and the ocean glints, elusive, in the background. Here there are many Vancouvers and no Vancouver, a city meant for elsewhere after the flood has swept through. This place of the living and the dead has been rewritten: forests are subsumed by parks, buildings sink and morph, and the climate has changed.

Vancouver for Beginners is a ghost story, an elegy, and a love song for a city that is both indecipherable and a microcosm of a world on fire.

“Ingenious, mesmerizing and gorgeously written,” writes Ayelet Tsabari, author of The Art of Leaving. “[The book] showcases Leslie’s remarkable talent and singular voice. It conjures an imagined city that is many cities, a place as fantastical as it is achingly real, a city of the dead and the living, of Plexiglass cliffs and electric trees. This is a book to savour and reread.” Sachiko Murakami, author of Get Me Out of Here, writes that “Alex Leslie’s Vancouver is as surreal as the dream city itself. These dispatches from Vancouver’s past, present, and future overflow with piercing, wry vision. Leslie casts a keen eye over short-sighted development and pans out to the wide-lens perspective of deep time. Meanwhile, the city’s inhabitants grapple with the day-to-day: parasitic developers, potentially rising radioactive waters, friends lost one by one to the opioid crisis. Captivating and urgent, Vancouver For Beginners is a must-read for anyone who ever woke up bewildered in Vancouver.”

Leslie reads “Two,” a poem from the collection, in the following video:

A developer built two buildings
side by side near Hornby and
Helmcken Streets: one to house the
dead, one the living. A crew nailed
clapboard over the front of the
house of the dead, sold apartments
for $1.7 million apiece in the house
of the living. Problems arose when
the living and the dead began to
wave at each other from the side
windows, throw messages carried
on the breeze, and communicate
through the pipes that provided
the two houses with water from
the reservoir in the mountains. The
house of the dead hosted all-night
parties, had a guy who could get you
anything you wanted and the oldest
functioning pop machine downtown,
a buck a can. The house of the living
had a rooftop whirlpool jacuzzi.
The house of the dead adrift in an
ocean of rumours after two guys
were found on the roof, chained to
a pipe. The story goes they couldn’t
cover the rent. But many crashed
with friends in the house of the
dead. The landlord, a guy obsessed
with collecting aquariums, turned a
blind eye. In both buildings, people
crawled into their beds in exactly
the same way. No guest policy in the
house of the dead. People circulated
in the hallways for months, eating
cheese sandwiches on the fire escapes
to feel the sun drinking from the
cold priceless rain. The developer
hired a consultant to build a bridge
between the buildings and charged a
fee for inhabitants of the house of the
living to visit the house of the dead.
The house of the living was made of
steel and glass, and its inhabitants
had forgotten how to see in the dark.
The living were blunderers. The twin
buildings spun in the faint glow of
a spectral sunset. This Vancouver
opened its prospector’s ocean-sized
eye. The living went back across the
bridge when they’d had enough of
suffering. Nothing to see here. The
house of the dead was condemned,
scheduled for redevelopment in 2021.
The public was welcomed to attend
a community consultation session,
but the dead were not invited. The
development notice was posted and
the dead decorated it with the names
of their friends. An artist with a grant
hung a hammock between the two
buildings. He lived in the hammock
for a month and livestreamed
from it. His piece reflected on the
Vancouver housing crisis. One
night, a windstorm blew him down
and he moved into the house of
the dead. For two weeks afterward,
Vancouver projected the footage
from his livestream onto the facades
of the houses of the living. People
watching the display forgot the house
of the dead had been condemned,
forgot about the community
consultation session, and so the
building continued as it had been.
They took better care of their home
this time, came and went mostly
at night, didn’t bug the lawyers
walking up Hornby Street between
the subterranean parkades and the
courts. Everybody knew the house
of the dead was there, but it was
no longer a controversy. The dead’s
living twins in the neighbouring
building never thought about them
anymore. In this Vancouver, people
could get used to anything. The
living and the dead didn’t make eye
contact and used separate entrances,
because otherwise time might get
confused, buildings might shuffle a
little bit to the left or right and switch
positions. The apartments in the
house of the living were put up for
sale and changed hands regularly, but
in the house of the dead were renters
and squatters and the occasional
translucent teenaged prophet. That
was the way of the city, spreading in
all directions.

Alex Leslie was born and lives in Vancouver. She is the author of two short story collections, We All Need to Eat, a finalist for the 2019 Ethel Wilson Fiction Prize and the 2020 Western Canada Jewish book Awards, and People Who Disappear, which was shortlisted for the 2013 Lambda Literary Award for Debut Fiction and a 2013 ReLit Award. She is also the author of the prose poetry collection, The things I heard about you (2014), which was shortlisted for the 2014 Robert Kroetsch Award for innovative poetry. Alex’s writing has been included in the Journey Prize Anthology, The Best of Canadian Poetry in English, and in a special issue of Granta spotlighting Canadian writing, co-edited by Madeleine Thien and Catherine Leroux. She has received a CBC Literary Award, a Gold National Magazine Award, and the 2015 Dayne Ogilvie Prize for LGBTQ Emerging Writers.