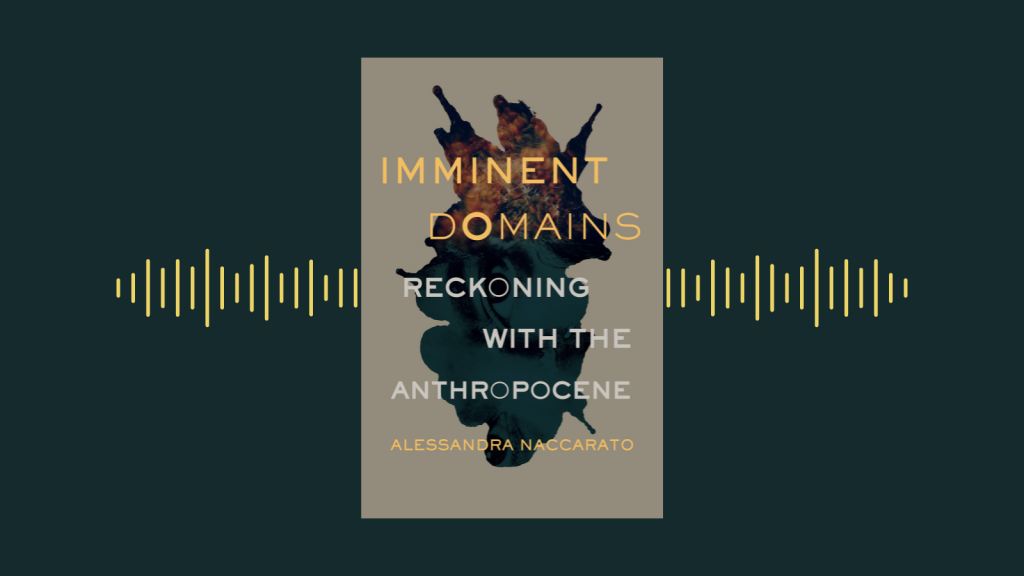 Today’s book playlist was crafted by Alessandra Naccarato for her essay collection, Imminent Domains: Reckoning with the Anthropocene.

Imminent Domains: Reckoning with the Anthropocene invites readers to join a contemplation of survival—our own, and that of the elements that surround us. Using research, lyric prose, and first-hand experiences, Alessandra Naccarato addresses fundamental questions about our modern relationship to nature amidst depictions of landscapes undergoing dramatic transformation.

“There is gorgeous LIFE in these interlacing essays, which refuse to accept life’s brutal and casual devaluation in the name of extractive settler-colonialism. Imminent Domains is a beautiful feat of artistry and truth-saying,” writes Kyo Maclear, author of Birds Art Life.

Naccarato’s playlist features one tune for each essay in the collection, including the introduction and the understory, so you can listen and read along.

Find the official playlist below, or listen on Spotify. Enjoy! Imminent Domains is available to order from our online shop or your local independent bookstore.

I Believe in Being Ready by Rising Appalachia
Sorrowful Soil by Björk
Wolves by Maggie Rogers
Species by Eliot Sumner
Vesuvius by Sufjan Steves
Mining for Gold by Cowboy Junkies
Sacred Stones by Moe Clark, Solawa
Hurricane Drunk by Florence + The Machine
Flood by Sátyr, Drxnk
Down by the Water by Abigail Lapell
Geese by Joshua James
Honey Honey by Feist
Pollen Path by Elana Low
Ninna Ninna – Lullaby by Unspecified
We Rise by Batya Levine
Wildflowers by Tom Petty
The Lost Words Blessing by Spell Songs

Alessandra Naccarato is the author of Imminent Domains: Reckoning with the Anthropocene (Essays) and Re-Origin of Species (Poems). Born and raised in Tkaronto (Toronto), she is the recipient of the RBC Bronwen Wallace Award and the CBC Poetry Prize, and her poetry and essays have appeared widely in publications such as The New Quarterly, Room Magazine, and Event. She holds an MFA in Creative Writing from the University of British Columbia, and a graduate degree in Community Economic Development from Concordia University, supporting two decades of work and research in grassroots social change, community arts, and the prevention of gender-based violence. Her debut poetry collection, Re-Origin of Species, was awarded the AICW Bressani Literary Prize for Poetry, shortlisted for the Gerald Lampert Memorial Award, longlisted for the Pat Lowther Memorial Award, and named a Best Book of 2019 by CBC Books.
Alessandra Naccarato, Book Playlist, Imminent Domains
Share this post
Facebook Twitter Pinterest