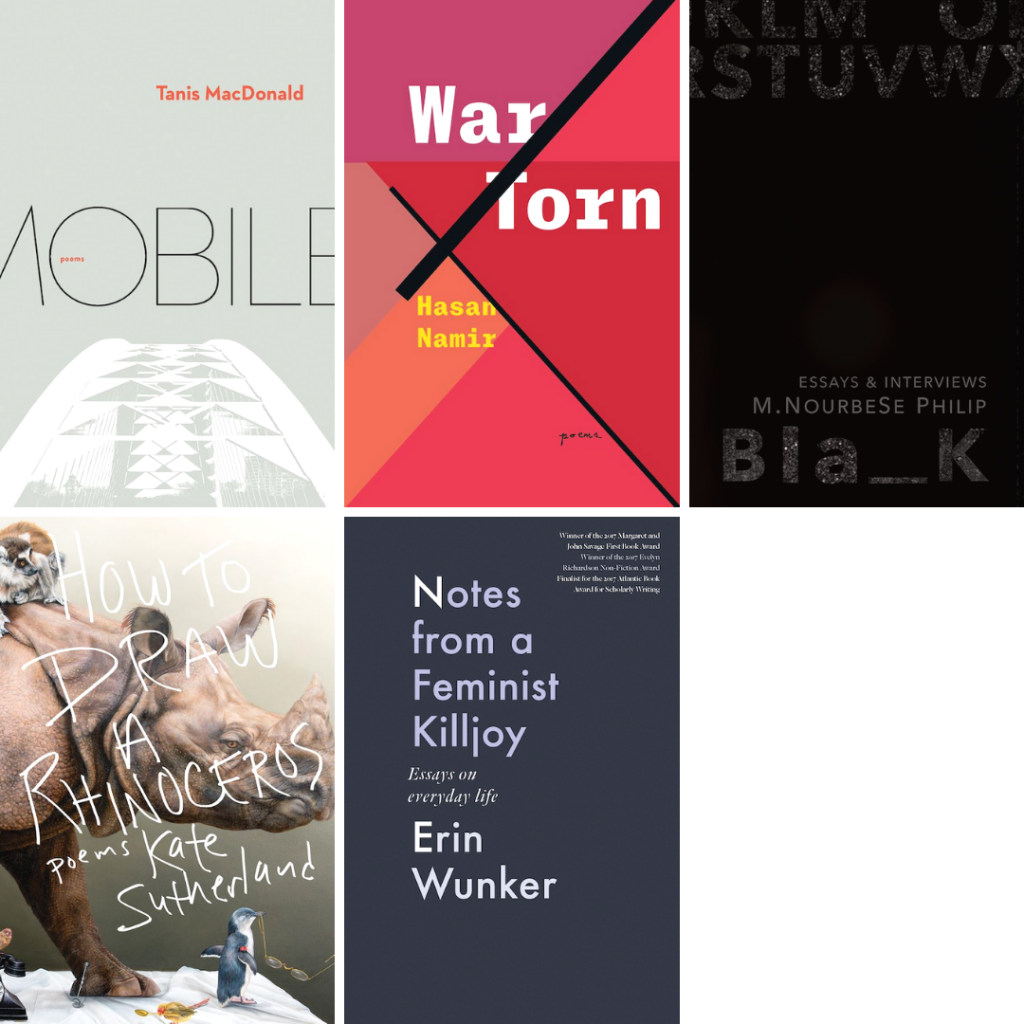 Today’s selection of books shines a light on historical injustices: colonialism, homophobia, transphobia, racism, sexism, and ableism, to name a few. These titles prompt us to interrogate the status quo; to fight back against systemic oppression; and, perhaps most importantly, to educate ourselves. It’s never the wrong time for resistance.

Mobile is an uncivil feminist reboot of Dennis Lee’s Civil Elegies and Other Poems; an urban lament about female citizenship and settler culpability; an homage to working and walking women in a love/hate relationship with Toronto, its rivers and creeks, its sidewalks and parks, its history, misogyny and violence. Tanis MacDonald’s collection asks critical questions: how do we, in Lee’s words, see the “lives we had not lived” that “invisibly stain” the city? What are the sexual politics of occupying space in a city, in a workspace, in history? How can we name our vulnerabilities and our disasters and still find strength?

War/Torn is a brazen and lyrical interrogation of religion and masculinity—the performance and sense of belonging they delineate and draw together. Hasan Namir summons prayer, violence, and the sensuality of love, revisiting tenets of Islam and dictates of war to break the barriers between the profane and the sacred. “Precise and relentless in its interrogation of doctrine, intimacy, and masculinities, Hasan Namir’s poetry is informed by violence and infused with tenderness,” writes Carleigh Baker, author of Bad Endings. Daniel Zomparelli, founder of Poetry Is Dead, calls the book “beautiful, heartbreaking and an unflinching look at the terrifying reality of homophobia, war and shame.” The 2020 Stonewall Book Awards named War/Torn an Honour Book in the Barbara Gittings Literature Award category.

Namir’s second poetry collection, Umbilical Cord, is forthcoming from us in Spring 2022.

Bla_k explores questions of race, the body politic, timeliness, recurrence, ongoingness, art, and the so-called multicultural nation. Through an engagement with her earlier work, M. NourbeSe Philip comes to realize the existence of a repetition in the world: the return of something that, while still present, has become unembedded from the world, disappeared. Her imperative becomes to make us see what has gone unseen, by writing memory upon the margin of history, in the shadow of empire, and at the frontier of silence. “She isn’t politic; she’s political. Unabashedly,” writes George Elliott Clarke, a former Canadian Parliamentary Poet Laureate (2016–17). “Her ruthless truth-telling is page-turning and paradigm-overturning.”

How to Draw a Rhinoceros by Kate Sutherland

Kate Sutherland’s first poetry collection, which was a finalist for the 2017 ASLE Creative Writing Book Award, explores themes of colonialism, animal welfare, and conservation. It mines centuries of rhinoceros representations in art and literature to document the history of European and North American encounters with the animal—from the elephant-rhinoceros battles staged by monarchs in the Middle Ages; the rhinomania that took hold in France and later in Italy in response to the European travels of Clara the “Dutch” Rhinoceros in the mid-1700s; the menageries and circuses of the Victorian era; the exploits of celebrated twentieth-century hunters like Teddy Roosevelt and Ernest Hemingway; and the trade in rhinoceros horn artefacts that thrives online today.

“In How to Draw a Rhinoceros, Sutherland draws upon historical documents and imagined perspectives to present a palimpsest that maps imperialist invasion, European plunder of brown and black countries, kidnapping, murder, and enslavement,” writes Hoa Nguyen, author of As Long as Trees Last. “In verse that invents, alludes, and allows for considerable vivid delving, the poems present and speak back to white violence and a colonialism that framed and imprisoned those that they conquered (including people) as exploited ‘exotics’ for European appetites.”

Sutherland’s forthcoming poetry collection, The Bones Are There, treads similar ground, and is equally committed to demanding accountability and encouraging resistance. The book will be released on October 13th.

Notes from a Feminist Killjoy: Essays on Everyday Life by Erin Wunker

Erin Wunker’s award-winning book Notes from a Feminist Killjoy: Essays on Everyday Life invites the reader into a conversation about gender, feminism, and living in our inequitable world. Following in the tradition of Sara Ahmed (the originator of the concept “feminist killjoy”), Wunker brings memoir, theory, literary criticism, pop culture, and feminist thinking together in this collection of essays that take up Ahmed’s project as a multi-faceted lens through which to read the world from a feminist point of view. In addition to its critical acclaim, Wunker’s book has won several awards, including the Margaret and John Savage First Book Award (Atlantic Book Awards, 2017) and the Evelyn Richardson Non-Fiction Award (East Coast Literary Awards, 2017). Sara Ahmed herself writes, “This book offers a powerful plea for a feminism that is willing to kill any joy that derives from inequality and injustice. All feminist killjoys will want this book on their shelves!”