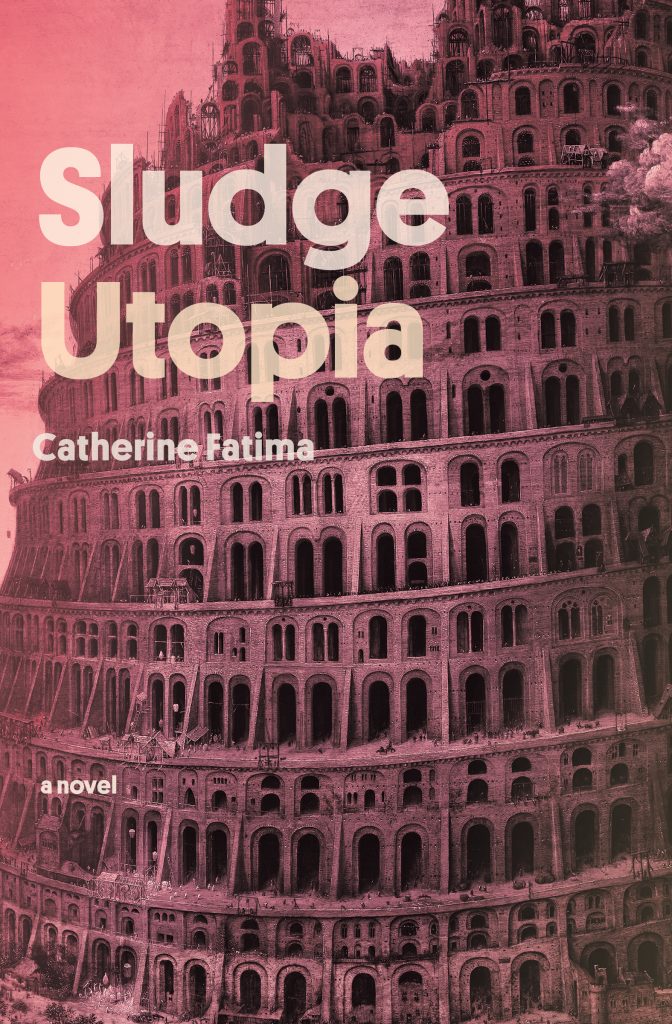 For this week’s edition of Feature Friday, we are pleased to bring you an excerpt from Catherine Fatima’s debut novel, Sludge Utopia, an auto-fictional novel about sex, depression, family, shaky ethics, ideal forms of life, girlhood, and coaching oneself into adulthood under capitalism. From an intellectual relationship with a professor, a casual sexual relationship, to a serious love affair, to a string of relationships that takes Catherine from Toronto to France and Portugal and back again, Sludge Utopia presents, in highly examined, raw detail, the perspective of a young woman’s punishing though intermittently gratifying sexuality and profound internalized misogyny, which causes her to bring all of life’s events under sexuality’s prism.

Of Sludge Utopia, novelist Sheila Heti says “few recent novels have absorbed me so completely, and filled me with this kind of plain admiration: here is a fresh mind, a captivating voice, and analytical acuity. It leaves me feeling as though I had discovered a female, 21st century Henry Miller for all its unfiltered engagement in the raw and the real.”

We hope you enjoy this excerpt from Sludge Utopia. Happy reading!

Arrived. Spent the night at Claude’s because Odile’s relationship with Anton has become bumpy, and she expressed queasiness at having me at her apartment two days before I left Toronto. I expected that if I asked to stay at Claude’s apartment, he would try to sleep with me, and I was correct. Earlier, surprisingly, I had a very lovely time with him. I was received at the train station at noon by Odile, who took me to lunch before bringing me along to her friend’s house. I was completely exhausted, certain we would not be stopping by her and Anton’s. I asked Claude if I could stop by his place a couple of hours earlier than planned, to nap, and he said yes, and there was simply no substitute for this—I don’t know what I would have done without it. For a couple of hours, he worked and I slept, neither of us disturbed, until he woke me to walk down to the Bastille for Moroccan food. Bizarre that he chose a restaurant an hour’s walk from his apartment by Crimée, but the walk was lovely, full of my memories of the Parisian northeast, and he was lovely to talk to. In the past he’d been exhaustingly didactic with his Marx and his Hegel, and considering the demands of the graduate program he moved here for, I expected even worse, but got instead, thankfully, conversation.

We spoke personally—of goals, relationships, family—in articulate terms. Claude is physically beautiful, mostly in just the ways I like: small, compact but strong frame, a nice mouth, slightly too much hair on his head. He’s smart, and sometimes very stimulating for me, but there’s just something. There’s a certain warmth toward him I lack totally. I really do not feel attracted to this person who by all accounts it would make sense that I would be attracted to. I could give this lack of attraction reasons—sometimes I think he is a bit emotionally stupid, unaware, patronizing, not always respectful—but these qualities have not stopped me from being attracted to others! Maybe it’s that they coalesce in Claude to a degree of masculinity that is unbearable. Maybe it’s that in all his free avowal of affection for and attraction to me, I don’t see any vulnerability in him. I just think of him as a playboy.

But: conversation was great! Nice discussion of Catholic versus Protestant ethics. It brought clarity to certain ideas I’ve had about the religiosity that seeks God in others—in ritual and presence—rather than a private, elected relationship to a supreme impersonal essence that doesn’t have much to do with life on the ground, more concerned with cleanliness and abstinence. I’d earlier thought this latter sort might be the default for irritating, intellectual, late-conversion Christians, but it might be just Protestantism rather than Catholicism. It was great! And when he kissed me by the canal, I was happy for it; I smiled and enjoyed it. He kisses in a way that’s compatible with me, and he held me with a force I liked a lot. It was, in terms of pure sensuality, better than any embrace I’ve had in some time, but it was just, I don’t know, without.

I had no idea how to return to his apartment and not fuck him since I’d been active in kissing, and how I did this was: passively and gracelessly. I just stopped responding to anything, but this did not make him stop, because I suppose nothing makes certain people stop, short of saying, stop. He didn’t force fucking, and he didn’t take out his dick, but he did, sort of, just continue kissing and humping for so much longer than I would have expected one could without garnering a response. What became most alienating to me was that he could continue to be turned on despite my inactivity and my occasional slaps of his hand from my panties. I collected myself and told him that it wasn’t working for me, that this is not how I behave when I’m “feeling the way I usually feel doing this,” that I’m normally aggressive! He still went at it, again. Some moans of my name. I resented that he did not stop when I made it verbally clear I wasn’t comfortable, and I wasn’t about to fucking reward him for this.

Maybe I’m not attracted to Claude because he is the sort of person who can go on like this. I preferred the physical sensations of being with Claude to those of recently being with Max, but Max brings out such lightness and affection in me. For all the hours of talking we did last night, Claude didn’t bring out any. I slept better next to Claude than I would have next to someone I cared for, and we woke up late this morning. I packed up my things, Odile finally in her apartment to welcome me. When at last I arrived there, it was lovely! She and Anton made a nice, late lunch. The apartment is beautiful, bright, back in Montreuil. Since then I’ve walked into the city along routes I remember, not terribly affected by last night’s discomfort. It’s sunny. Pyramids of baklava and basbousa flood out of the convenience stores onto the street. I like being flooded with memories even of uncertain, lonely times. It makes me feel familiar, and like I have some sort of home here, even when, in truth, I don’t. I am now dependent on those I know the city through, and they are kind to let me stay with them. I can sit in a room alone all I want once I’m in Tours for my next course.

I know my desire is not making choices (it certainly isn’t making many good ones!) but I think there is some intuitive judgment about the vulnerability of the other at the heart of it. In Claude, who is smart, beautiful, and quite sexy, there’s just this sort of improvised affectedness that’s missing. I just feel like he’s never surprising himself, always saying something prepared, unreliant upon me, that he was ready to say prior. And though I do become attracted to people who vacillate and reject, I don’t ever become attracted to those I see as truly untouched by me. I like the stumbling, the inadvertent jokes, the speech obviously conjured anew, the guileless (if noncommittal) “It’s another world in your world.”

Despite my romances going, by and large, badly, there is something a little vigilant about my desire. Before any kiss, I mentioned to Claude (unexpectedly!) that there were certain people for whom I’d always have a feeling of lingering erotic warmth (and so, too, would always value the same feeling in kind). It’s a changeless feeling of privileged warmth that no interceding love or infatuation can take away, that can always be invigorated. It’s a way of colouring these people that supersedes any feeling of debt or betrayal or resentment. What forms it is unclear—but I think it involves a mutual puncturing. There’s a certain kind of warmth I’m never going to stop feeling for those I’ve been nude with who’ve displayed vulnerability with me, and who came to conclusions in my presence they wouldn’t have come to if I weren’t there. I want the vulnerability of someone who goes soft if he thinks he’s being denied, not the self-invigorated lover who then gets harder and doubles down.

Oh, very funny line way back one week ago from night walk with Max in the park, talking about jerking off. I said that in my case there’s no filth, no product, and no feeling of exhaustion for having made any. Max said to this: I wish every time you came, a little bit of my come came out. This was a very funny and wholly surprising thing to hear him say. Romantic in a very strange way. The funniest exchange of my evening with Claude was when, excited for discourse on the street, I asked, “Oh my god, when we get back to your apartment, do you want to sit and read for, like, three hours?!” and he said, “No?!” 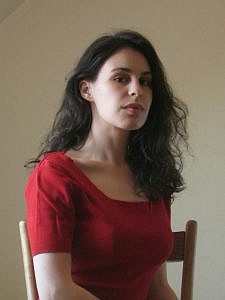 Catherine Fatima is a writer who was born, raised and currently lives in Toronto. Sludge Utopia is her first book.