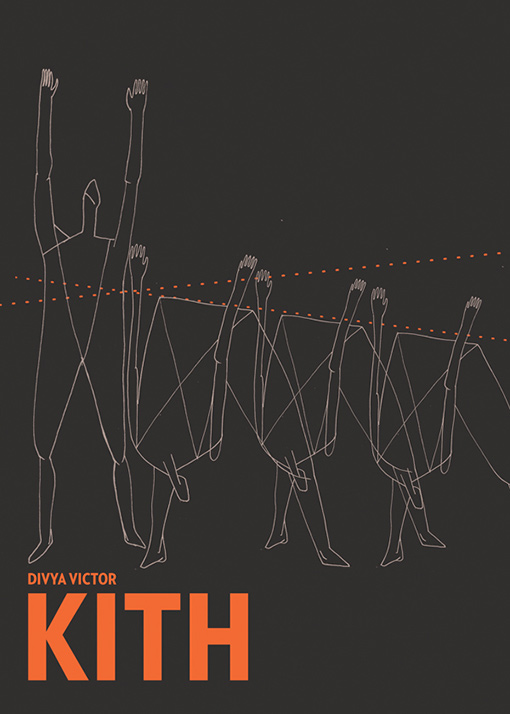 Either as a way of knowing or being known; either by the way a “we” exists
or does not when we are not home; either as targets or by treason;
either as a question of resemblance or in answer to a name: kith.

For this week’s edition of Feature Friday, we’re pleased to bring you an excerpt from Kith by award-winning writer Divya Victor. Kith engages Indian-American diasporic culture in the twentieth century, via an autobiographical account that explores what ‘kith’ might mean outside of the national boundaries of those people belonging to the Indian and Southeast Asian diasporas. Questions about race and ethnic difference are explored in these poems: How do ‘brownness’ and ‘blackness’ emerge as traded commodities in the transactions of globalization? What are the symptoms of belonging? How and why does ‘kith’ diverge from ‘kin,’ and what are the affects and politics of this divergence? Co-published by Book*hug and Fence Books, Kith is an unflinching and simultaneous account of both systemic and interpersonal forms of violence and wounding in the world today.

In praise of Kith, Amitava Kumar writes, “What we have on display in this book is an imagination that is as wide as the world. Part-anthem, part-instruction manual, part-memoir, part-dictionary, this text offers testimony to other ways of being and remembering, a reflection on forgotten lives.” Douglas Kearney adds to this, saying “A keen shriek for stricken kin, Kith pierced me. Divya Victor’s concentrated anger and t(h)rilling intelligence reverberate through these poems, essays, pronunciation exercises, and grim primers.”

We hope you enjoy this excerpt from Kith. Happy reading!

SECOND ATTTEMPT: TO COLLECT ALL MY MOLES

TO MAKE A MOLEHILL ON NO MAN’S LAND

a wrinkled grey corpse just so many finger clippings when seen

from above a thousand creamy crescent moons fallen on the dust |

as viscous black bitumen or the pus-beige of beeswax coloured

with vermilion doused in shellac bathed in turpentine and

place where I can flap it open the correspondence flittering out

postcards from Benghazi where my father churns salt water from

the Mediterranean sea into sweet water slumbering in a holy font

Cathedral wearing and tearing its marbled skin off

HOW TO SURVIVE ON LAND IF YOU ARE MADE OF PAPER

on an exit handy

walk up to strangers

them to divine your path

past the Walmart & into

the parking lot where you live

in a Toyota hatching

make of your walk a wall

make of your arms an armory

make of a memory nothing but selfsame

but in the darkness of movie theatres

memorize the faces with lined eyes

the dead flittering out

of your thrifted coats

cinematic litter— did you see have you seen

Once they found a man made of distance— a coat of shells, a wig

of weeds— and at his breast a suckling book made of salty skin,

stamped on its chubble joints, its fatty folds— us, us— visas. Two

they said, let us buy you.

Once it saw the man— Was he waving or drowning? It matters not:

what is of the water returns to water— Once it saw the man, the

boat rowed itself from the shore, folding fins out like a manta ray

breaching into red spray, cartilage and cartridge inked out, flared

into an X: marking this location and the boat’s movement.

Once the man was finally harpooned and lanced to death, the boat

towed him ashore, and, with small cranes sprouting from its fins,

flank to fo’c’sle; skull to stem; fore and aft.

That thing at the end, Child, this was everything that came after

Aft was everything we became.

Child\ he said\ put out to deep water

and so we did

Child\ he said\ let down your net

and so we did

Child\ he said\ catch your fish

and so we waited

Order your copy of Kith here. 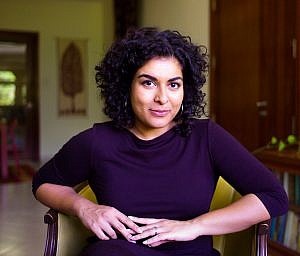 Divya Victor is the author of several books and chapbooks, including Natural Subjects (winner of the Bob Kaufman Award), UNSUB, and Things To Do With Your Mouth. Her chapbooks include Semblance, Hellocasts by Charles Reznikoff by Divya Victor by Vanessa Place, and SUTURES. She was born in southern India and lives in the US where she teaches at the University of Michigan.