Celebrating International Women’s Day: Writers on the Women Who Shaped Them | Book*hug Press 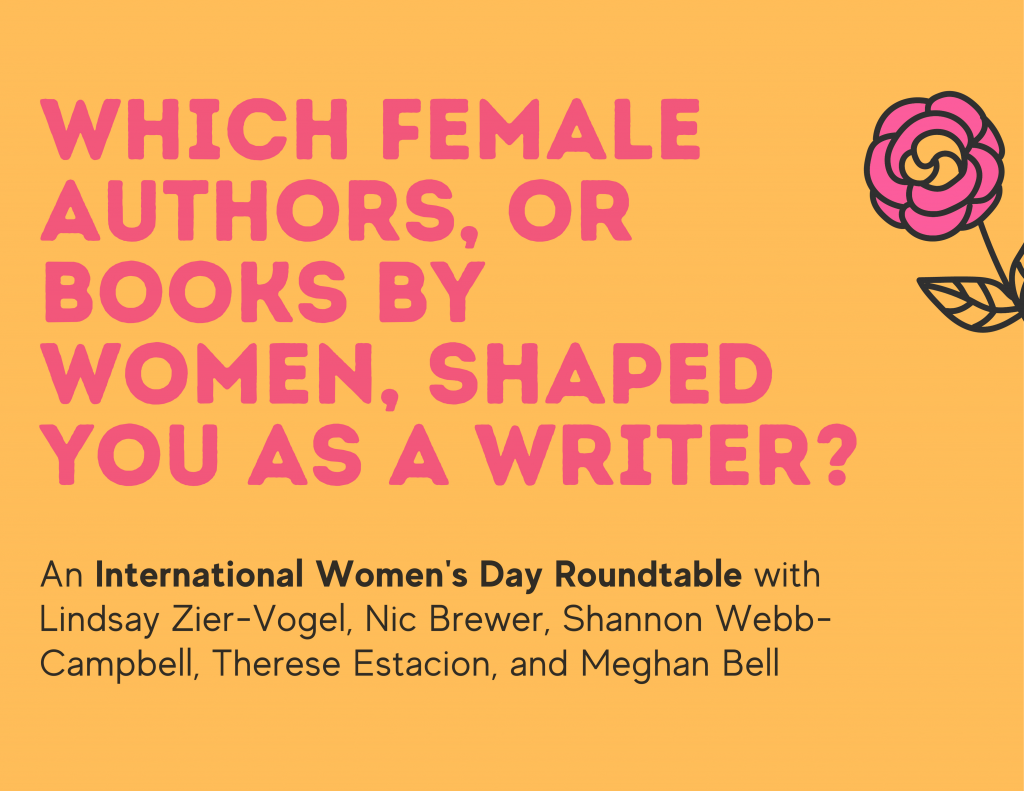 Happy International Women’s Day! In honour of the occasion, we asked a group of Book*hug authors to speak about the female writers who have had an indelible influence on their work.

Lindsay Zier-Vogel, Bahar Orang, Nic Brewer, Shannon Webb-Campbell, Therese Estacion, and Meghan Bell share a variety of thoughts and book recommendations. From classics by Alice Munro and Gloria Anzaldúa to contemporary works by Rachel Yoder and Vickie Gendreau, these authors read far and wide. As Shannon Webb-Campbell states, “women are the lifeblood of literature,” and we are grateful to the many unforgettable female voices that make up the chorus.

B*H: Which female authors, or books by women, shaped you as a writer?

Lindsay Zier Vogel, author of Letters to Amelia:
When I was in Grade 9, my mom gave me a copy of Alice Munro’s Lives of Girls and Women and though I don’t think I understood it then, it felt like an initiation into a world of women, written by women, which was such a departure from everything I had read in school up until that point. In the last few years, I’ve been really focused on experiences of motherhood, and have been reading and re-reading The Golden State by Lydia Kiesling, Want by Lynn Steger Strong, The Second Season by Emily Adrian and Nightbitch by Rachel Yoder with no end in sight.

Nic Brewer, author of Suture:
Miriam Toews, Anakana Schofield, and Guadelupe Muro were the three women authors who first made me feel like what I wanted to be writing was achievable, even though I was a “woman writer.” I struggled with internalized misogyny for years, and it’s not too dramatic to say those three women changed my life. A Girl is a Half-Formed Thing by Eimear McBride, Testament by Vickie Gendreau, translated by Aimee Wall, and Virginia Woolf’s To the Lighthouse are three books that have specifically inspired and shaped me as a writer, to find boundaries and push them.

Therese Estacion, author of Phantompains:
Four books come to mind when thinking of women authors who have helped me find my voice: The Source of Self-Regard: Selected Essays, Speeches, and Meditations by Toni Morrison, The Bloody Chamber by Angela Carter, Float by Anne Carson, and Borderlands/La Frontera: The New Mestiza by Gloria Anzaldúa.

Meghan Bell, author of Erase and Rewind:
I became obsessed with the power of stories quite young and started writing for fun when I was around eight, and so many of the authors who shaped me wrote for children and young adults; the works of Madeleine L’Engle and Monica Hughes, and, of course, Katharine Applegate’s Animorphs series (my mother gave away my collection when I was a teenager, and I missed them terribly—I also don’t like jewelry, and so when my husband proposed to me, he bought the entire series (sixty-four books!) as my engagement gift, and then we reread them together … they hold up!). Now, as an adult, I’ve found a lot of inspiration (and healing) in Dr. Clarissa Pinkola Estés’s audiobooks, which combine traditional storytelling, Jungian psychology, music, and poetry. I think everyone should listen to her, especially women. To start, I recommend the Mother Night series or Women Who Run With The Wolves.