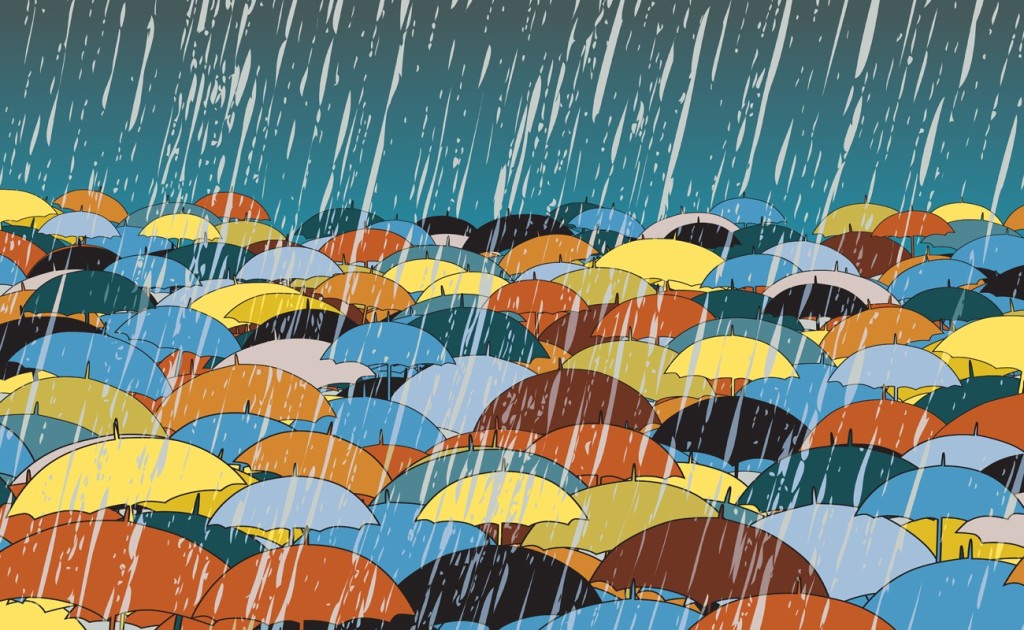 Carellin Brooks’s luminous new novel One Hundred Days of Rain opens with its narrator in the throes of a catastrophic break up. The book chronicles the year that follows, as she weathers the aftermath and moves on. Set in the profoundly rainy city of Vancouver, each chapter of the book is a rainy day, or a rainy moment of a day, chronicling her day-to-day through the veil of ninety-nine tightly drawn vignettes, sonnet-like in their focus on their chosen subject: the rain. Through the rain we watch her navigate the chaos of starting over.

One Hundred Days of Rain is an gorgeously painted, introspective novel. Brooks takes the everyday hard work of urban adulthood, single motherhood, and of defending one’s dignity through the inevitable aftershocks of a messy divorce and shows it through this sustained theme of the pervasiveness of rain. What pulls the narrative out of the everyday is the way Brooks camouflages it all in an exquisite poetry of raininess.

From 49th Shelf: As she wakes each day to encounter Vancouver’s sky and city streets, the narrator notices that the rain, so apparently unchanging, is in fact kaleidoscopic. Her melancholic mood alike undergoes subtle variations that sometimes echo, sometimes contrast with her surroundings. Caught between the two poles of weather and mood, the narrator is not alone: whether riding the bus with her small child, searching for an apartment to rent, or merely calculating out the cost of meager lunches, the world forever intrudes, as both a comfort and a torment.

Advance Praise for One Hundred Days of Rain:

A quiet and meditative book that reads like a mystery: How do we find ourselves—sometimes simultaneously—moving both toward and away from the things that matter to us most?
—Johanna Skibsrud, 2010 Scotiabank Giller Prize Winner for The Sentimentalists

Is there a worse city in which to suffer a vindictive, litigated break up than unrelentingly sodden Vancouver?  In these one hundred intimate chapters, Carellin Brooks has convinced me no. Her forbearing heroine bikes through torrents, dodges puddles, keeps moving through bitterness and weather.  Nobody, not even the rain, has such nerve.
—Caroline Adderson, author of Ellen in Pieces

Carellin Brooks’ marvellous and brooding novel, sparking after yet another downpour, offers a natural history of rain and breakups. Just as snow-bound cultures have numerous words for different kinds of snow, so the Vancouverite requires many words and varied descriptions for rain. The exquisite descriptions of internal and external tensions are what capture here, what pierce and press the reader forward, j-walking through the tumbling language of rain, dodging in and out of the doorways of these short, sharp, shocked chapters. Carellin Brooks offers a loud and persistent rejoinder to the idea of “the pathetic fallacy”: the internal and external do coalesce, and they do so at the apex of the most precise and revealing sentences I have read in years.
—Stephen Collis, poet and novelist

All of the noises of the jail are unfamiliar ones. She is surprised by how the procedures resemble those she’s seen on TV, especially the invasive ones. Bend over, say the kindly impersonal guards – guards! – and she realizes, smiling disbelievingly, that they are serious.

Other things that she could not have predicted. The stamping of her hands, which are covered with rich black ink and pressed onto a special sheet, with sections. Everything has its place and is neatly organized: there’s a sink afterwards, and a special kind of soap, to wash.

She poses for photos also, side and front, and at intervals is led to a telephone within a giant hood, like the sort of dryer they place over your head in an old-fashioned salon. When she picks up, at the end of the distant echoey line is a voice: a lawyer. There are two charges, two separate ritual calls, but his advice is invariable. What are you charged with? he demands, at once, and when she tells him: Don’t say anything. For he must know that she is bursting to talk to anyone who will listen: I am innocent, you are mistaken.

The heavy steps of the guards measure out the hallway beyond. There is the reassuring murmur of conversation and, behind that, a patter as of rain, dying slowly away with the distant clanging and clicking of doors closing, so faint that perhaps she has only imagined it. It was sunny when they took her, but hours have passed since then. Someone is screaming in another cell. At times the voice of a guard rises, shouting back. Someone in uniform brings her a bag: inside is an apple, a baloney sandwich, a box of milk. She drinks the milk, eats the apple. More hours pass. She is taken to the telephone again, shuffling, holding her blanket. They have given her a pair of jeans to wear, surprisingly decent ones, and taken away her shoes.

A justice of the peace is at the end of the line. He will release her but. She cannot return to her own home, own any knives but for cooking, contact her spouse. She questions these strictures. Perhaps, he suggests, she should wait and see a judge in the morning. No, that’s fine, she murmurs hastily, the conditions are fine.

Now the opposite of what has come before: more forms to be completed, the ceremonial return of the belongings ceremonially removed upon her arrival. Your wife left you a message, the cop at the desk tells her as he hands back her purse. She says to call your psychiatrist, he’s worried about you. Oh, and she says she loves you. She notes, grimly, these misrepresentations. Says nothing. Who here has believed her so far, who cares?

She dresses again in the clothes of the morning: her dark grey woolen skirt, her pearls, a little cream crewneck sweater. Once again she dons her dead-black tights, and the thick wedge loafers. Her red coat with the blonde fur collar is a beacon, the sharp colour of love in a cartoon; her translucent purse nestles under her arm, a friendly ghost. Today might never have happened. Everything is as before but for the passage of time, and the stain on her, invisible to anyone else. Now you’re sure you’ll be okay? a female constable asks her anxiously, unlocking the door to the outside world. You don’t want to call someone to pick you up? It’s a rough neighbourhood, you know. Several replies occur to her but as with the message she stifles them. She has learned her lesson.

The rain tonight is her favourite kind: drops so widely spaced as to convince you, until one plops on your forehead or lands on your arm, that you are only imagining them. The sky appears clear but for a few drifting clouds: here on earth, a sudden dollop of liquid rides her skin before flattening and disappearing. A few raindrops speckle the pavement and the fabric expanse of her coat but the wet is indeterminate: at any moment it might stop or begin in earnest. She has always liked that, the uncertainty of it. Rain you can ignore, until it resolves itself into something else. The next morning is clear again.

The child’s father has her son for the week. Alone she wakes to rain, seeping into crevices all around. She imagines she can hear it on the roof, five storeys above. Each storey a layer of people, like a cake studded with fruit. The rain coming through them all, through her. There must have been a time when the sun shone however watery. When the clouds parted and that single weak ray made its unerring way to ground. The point of God’s finger. But the wet world has wrapped her too long, she no longer remembers anything else. Rain has worked its way into a permanent condition.

She locks up the dim room where she lives. Outside the sky an undifferentiated lowering mass. There is no dark or light, just this pressing pale grey like an iron held up against the city. Blunt & inarguable against the constructed world. Steaming. Pedestrians cross the street without looking up.

Rain continues. It’s there every time she glances out her window at work, the one window permitted in their jail cell of a barred interior. Rain when she steps to the alley door to take a breather. Rain when she mounts her cycle. Well, bye then, she says to her coworkers, and rings her bell. Her bell unanswered in the alley. No need to hurry, with no child to pick up. She pedals down the wet road. Vehicle headlights flash as they turn before her in the predusk gloom. More and more she takes her hands off the bars, more and more she’s able to balance unaided. Folly, this sense of effortless motion on the rain-slick street.

The rain continues. February, month of love, drugstore hearts and gas-station flowers. Her son’s birthday, past now, her (deceased) grandmother’s birthday, her lover S’s birthday. People to think about. No point putting cards in the mail, buying presents. Not this year. The weekend comes. The child hers again. S back in town,

S who comes to visit regularly and faithfully, nine years now. They are watching the game in the restaurant, she and S and the child. Okay S is watching. Plates & pints.

What normal people do. She clings to it. On TV the rain is invisible. The football teams catch & fumble, drops spatter the lens. The camera pulls away and the rain is suddenly central to it all, visible, Biblical, coming down like fury on the people in the stadium. Helpless. The ball goes up again, arcing in that particular irregular parabola, the football players’ sinewy delicate hands reaching and failing to grasp.

This morning rain is faint, almost Victorian. Rain totters about with a skim-milk wrist held to its forehead, collapses on the divan. Rain seems not to be long for this world. Outside the cars swish on by, ignoring rain, the possibility of it, the outside world. Who cares! Rain has nothing on them. Rain can’t get in behind these sealed windows. Rain is barely there, not worth noticing, another dismissable part of the world nobody quite inhabits anymore. Rain’s days are numbered, it seems. The way rain does things is not the way things are done, not any longer. Rain doesn’t have any interface, it isn’t mediated. It lies there shuddering. Not very long now, rain murmurs quietly to itself.

Now Available! Order your copy of One Hundred Days of Rain at BookThug.ca today!

Carellin Brooks is a Rhodes Scholar and the author of fresh hell: motherhood in pieces (2013), Every Inch a Woman (2011), and Wreck Beach (2007). She edited the anthologies Carnal Nation, with Brett Josef Grubisic, and Bad Jobs. She is the winner of the Books in Canada Student Writing Award for poetry (1993), the Cassell/Pink Paper Lesbian Writing Award for non-fiction (1994), and the Institute for Contemporary Arts New Blood Award for prose (1995), Brooks lives and works in Vancouver, where she was born. Connect with Brooks at www.carellinbrooks.com or on Twitter @carellinb.