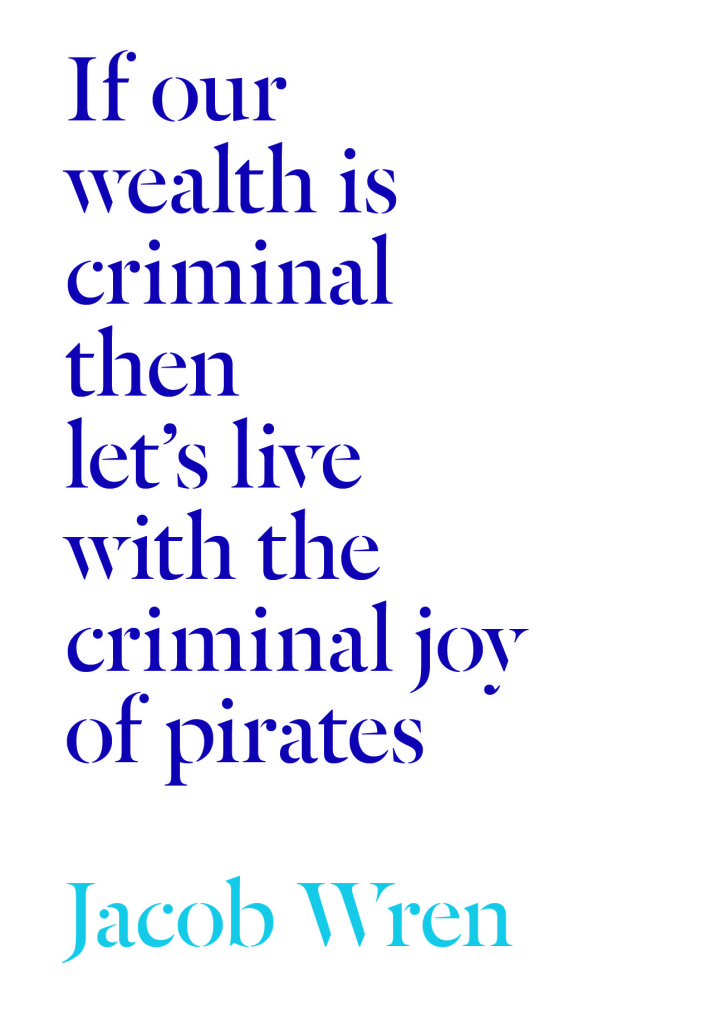 In honour of the inaugural Authors For Indies Day on May 2, 2015, BookThug teamed up with Toronto bookstore Type Books to produce a limited edition publication of two stories and an essay by Jacob Wren entitled If our wealth is criminal then let’s live with the criminal joy of pirates.

Canadian Authors for Indies Day is a celebration of the magical connections and special book love that can only happen at an independent bookstore. On May 2, over one-hundred and twenty indie bookstores across Canada participated and some seven hundred authors volunteered to work a shift in a local shop to greet customers, sell merchandise, and talk about books.

For the occasion, Type Books proposed that BookThug create a limited edition book that would be made available exclusively at Type Books for Authors for Indies Day. We immediately thought of Jacob Wren, author of Polyamorous Love Song, and approached him with the idea. Jacob offered up two short stories and an essay for the project, which were ultimately published in a pocket-size edition under BookThug’s Boondoggle Books imprint as If our wealth is criminal then let’s live with the criminal joy of pirates. We’re pleased to announce that the book is now available directly from BookThug.

In the first story, ‘The Infiltrator,’ certain ongoing, rarely mentioned, difficulties for the activist Left are explored with unlikely candour, as an agent provocateur  infiltrating a radical underground group deals with the interpersonal politics and emotional side effects of ideological espionage.

A part of a machine does not go around thinking, Look at me, I am this very specific and important part of the machine. It thinks about the machine, which must function and will function best if all the parts are thinking about the machine. Of course, I am a part of two machines with different goals and different modalities. The machines overlap but the overlap is invisible. And yet at times—in fact, most of the time—I imagine there is only one. One machine pulling in two separate directions, with me as its only common part.

In ‘Four Letters from an Ongoing Series,’ a writer of literary, unabashedly political books receives a succession of rejection letters from potential publishers, including one from a privileged male intern, who posits:

If I’m the enemy then really let me have it. If moral outrage about the state of the world is consuming your life, paralyzing you, taking over your world, then set fire to the reader in an act of revenge. Instead you leave the reader, or this reader at least, indifferent, watching your ineffective life unravel ineffectually. If our wealth is criminal then let’s live with the criminal joy of pirates or fight to the death to bring a sliver more of justice into being. Not the passive slither forward you are attempting to pass off as literature.

Finally, in the essay ‘Like a Priest Who Has Lost Faith,’ questions of art and emptiness shift focus in relation to the agency that at all times surrounds us.

In the most general sense, the hope that art can be meaningful in people’s lives brings it very close to the spiritual, and this might be one of the many reasons the topic is often avoided. If I say I want a career (which, of course, I do as much as any artist) I might come across as ambitious, but there is also something practical and down-to-earth in my pronouncement. If I say I want to make something meaningful it is a higher style of arrogance, more old fashioned, less critical and therefore less contemporary. The desire to make something meaningful brings along with it a thousand small distastes and taboos.

If our wealth in criminal then let’s live with the criminal joy of pirates collects Wren’s fiction and non-fiction in one book for the very first time. Of the “two stories and an essay format” Wren writes:

“In a way, all of my work involves putting fiction, non-fiction and theory together, sometimes more explicitly, at other times less so. I always prefer these hybrid forms. There’s that line from an old Vic Chesnutt song: ‘If there’s one thing I’ve learned in this chemical world / It’s very very very very very little is pure'”

The idea of a making a book that contains both short fiction and an essay seemed like a natural choice for BookThug Fiction Editor Malcolm Sutton.  “[Jacob’s] work is already a mix of these genres.” “I would love to see more such books,” continues Sutton, “not just for the new context that it offers the individual pieces, but because there is a kind of anti-intellectualism in North America that bleeds into fiction readership here. Putting fiction together with essays I think poses a challenge to the paradigm that would keep fiction pure of theory, as though fiction could somehow evade the reality that theory tries to interrogate. Putting fiction and essay together says yes to opening it all up.”

If our wealth is criminal then let’s live with the criminal joy of pirates is now available from BookThug. Pick up your copy of this very special collection today.

Jacob Wren creates literature, performances and exhibitions. His books include Unrehearsed Beauty (1998), Families Are Formed Through Copulation (2007), Revenge Fantasies of the Politically Dispossessed (2010), and Polyamorous Love Song (2014). As co-artistic director of Montreal-based interdisciplinary group PME-ART, he co-created the performances En français comme en anglais, it’s easy to criticize (1998), and the HOSPITALITÉ / HOSPITALITY series including Individualism Was a Mistake (2008), The DJ Who Gave Too Much Information (2011), and Every Song I’ve Ever Written (2013). International collaborations include a stage adaptation of the 1954 Wolfgang Koeppen novel Der Tod in Rom (Sophiensaele, Berlin, 2007); An Anthology of Optimism (co-created with Pieter De Buysser / Campo, Ghent, 2008); Big Brother Where Art Thou? (a project entirely on Facebook, co-created with Lene Berg / OFFTA / PME-ART, 2011); and, No Double Life For The Wicked (co-created with Tori Kudo / The Museum of Art, Kochi, Japan, 2012.) Wren travels internationally with alarming frequency and frequently writes about contemporary art. If our wealth is criminal then let’s live with the criminal joy of pirates is Jacob’s most recent collection.