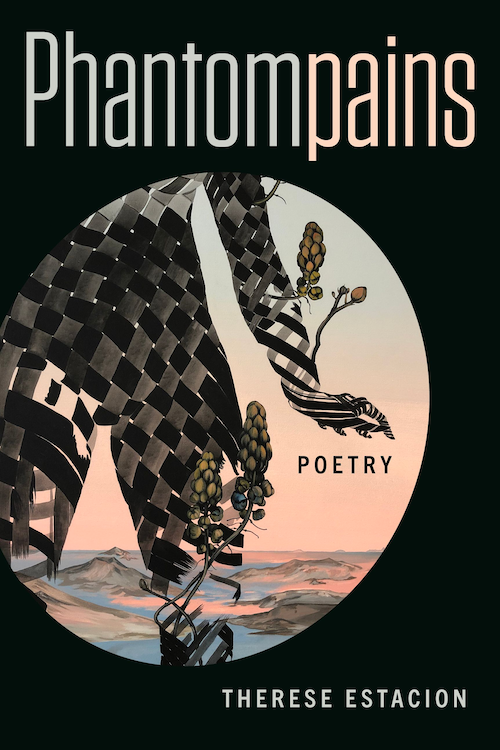 This May, please join us in celebrating Asian Heritage Month: a recognition of the humanity, power, and ongoing struggles of Asian communities throughout the world. Book*hug is honoured to have published ground-breaking, critically-acclaimed fiction, non-fiction, and poetry by Asian authors, and for the next several weeks, we’ll be shining a light on these authors and their brilliant work. We know that our work, as allies, doesn’t end with blog posts, nor does it end at the end of May; the fight for Asian empowerment is perennial. We encourage you to support—and defer to—Asian voices, organizations, and initiatives, such as the ACLA (Asian Canadian Labour Alliance) and Butterfly (Asian and Migrant Sex Workers Support Network).

Our series continues with Phantompains, Therese Estacion’s debut book. The collection began as an essential task to deal with the trauma of hospitalization and what followed: Estacion survived a rare infection that nearly killed her, but not without losing both her legs below the knees, several fingers, and her reproductive organs. Taking inspiration from Filipino horror and folk tales, the poems in Phantompains are demonstrations of the power of our imaginations to provide catharsis, preserve memory, rebel, and even find self-love.

“Therese Estacion plunged into an abyss—found suffering, dehumanization, terror—and when she emerged, she chose to make radically confrontational art,” writes Sara Peters, author of I Become a Delight to My Enemies. “In her words, ‘she became the subject’—I think she also became the seer.”

Therese Estacion is part of the Visayan diaspora community. She spent her childhood between Cebu and Gihulngan, two distinct islands found in the archipelago named by its colonizers as the Philippines, before she moved to Canada with her family when she was ten years old. She is an elementary school teacher and is currently studying to be a psychotherapist. Therese is also a bilateral below knee and partial hands amputee and identifies as a disabled person/person with a disability. Therese lives in Toronto. Her poems have been published in CV2 and PANK magazine, and shortlisted for the Marina Nemat Award. Phantompains is her first book.