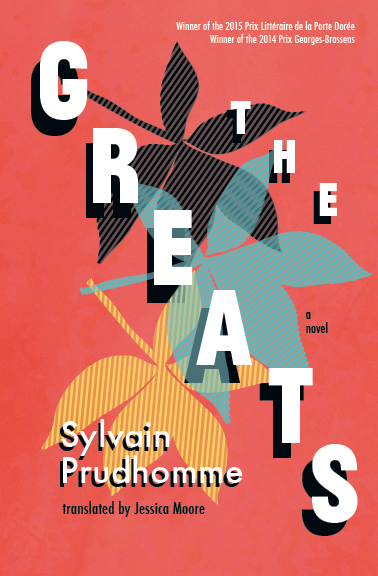 In this week’s edition of Feature Friday, we’re especially thrilled to bring you an excerpt from the award-winning novel The Greats by Sylvain Prudhomme, translated by Wellcome Prize winner Jessica Moore. Originally published in France as Les Grands (Éditions Gallimard), and winner of both the 2015 Prix Littéraire de la Porte Dorée and the 2014 Prix Georges Brassens, The Greats is a novel of mourning, love, and the thirst for justice that tells the story of a population who knew hope and independence but now live under the oppressive rule of an army dictatorship. BookThug is very proud to introduce the work of Sylvain Prudhomme, a steadily rising literary star in France, to English readers.

In The Greats, set in Guinea-Bissau in 2012, Prudhomme re-imagines the famous ’70s music group Super Mama Djombo, as seen through the eyes of Couto, the laconic guitarist. After learning of the death of the singer, Dulce—once the love of his life—Couto wanders through the capital city, from bar to bar, friend to friend. Thirty years file past in his memories: of the woman he loved, of guerillas fighting against Portuguese colonizers, and of the golden days of a legendary band that played all over the world with a sound that was new, fresh, and driven by the pride of an entire country. The tension mounts as the group frantically prepares a final concert in Dulce’s honour,  but little do they know, a coup d’ état is about to take place, executed by Dulce’s husband, Guinea-Bissau’s Army Chief of Staff.

Critics call The Greats “a beautifully written book. Vibrant and smooth, each line pulls us into an avalanche of sensations” (Les Inrockuptibles), and “a magnificent ode to music, love, and friendship…. This book will change you.” (Lire). Author Martha Baillie writes that “Jessica Moore’s splendid translation captures the rhythm of Prudhomme’s heart-felt homage to Guinea-Bissau.”

What better place to start than from the very beginning. Happy reading!

I muri.
Zé on the phone said these two words as gently as possible, doing everything he could to make them less cutting.
I muri Couto, she’s dead – repeating I muri as though he’d feared that the two words weren’t enough the first time, as though he himself needed to say them again.
Couto do you hear me you’re not saying anything.
Couto looked at the afternoon sun rushing in through the small skylight and falling on the bedroom floor lined with ageless colourless linoleum, looked at the specks of dust suspended in the ray and the ceiling mildewed with humidity and the stumps of melted candles on the window ledge, the incense spreading its pungent scent from the holder beside the bed, the faded photograph of Zé and Malam and all the others, elated, stepping down from the helicopter in Bubaque, in the Bissagos islands, thirty years earlier.
His eyes met Esperança’s where she lay stretched out naked beside him and he knew instantly that she guessed it, he saw her bend her knees, pull the sheet over the triangle of her belly as though over something that had suddenly become obscene, saw her burrow into the pillow and close her eyes.
Esperança you are like the dogs that hide away before the storm, Couto thought, you are deeply moving like animals that feel the thunder coming and, long before the first rumbles, huddle against the walls trying to disappear into the mud and straw. Esperança all we were was caresses and mouths and legs all tangled listening only to our hunger for one another and now we lie still, this sheet pulled over us, both cold in this bed, you and me side by side. Esperança your pussy is so good, I said, bu panpana i sabi demais, your pussy your beloved apple cashew is good and juicy like a good fruit and your breasts too that I catch and want to take into my mouth like good fruits, and same for me you said as you took it catching it lovingly Couto your cock is good too, bu abu i sabi demais, I want to steal it and take it home and then even where you’re not there I can keep having it and using it and thinking of you, that would give me pleasure.
Couto Zé kept saying on the phone, and now his voice was faraway, unreal, everything seemed in a state of suspension.
What happened.
They don’t know Couto.
What do you mean they don’t know.
No one knows anything.
Who told you then.
Bruno.
Bruno that sellout.
Stop.
Couto lay back without saying anything and waited for the pain to come, waited for the sadness of the news to bloom inside his body. But it didn’t come. There was nothing but this numbness, this torpor that came upon him slowly and at first seemed to him to be the opposite of pain, seemed instead to be a collapsing through sluggishness, a disconnection of his whole being, which had become incapable of feeling anything, of experiencing the least grief, of shedding a single tear, his eyes desperately dry, his breathing vaguely obstructed by something that could just as well have been only a deep fatigue. So this was what Dulce’s death did to him?
What’s going to happen.
He said this out loud, to himself as much as to Zé.
Do you want us to get together, Zé asked. Do you want me to tell the others to come to the house.
Couto exhaled.
I think I’d rather be alone.
He thought of the light outside. Of the shadows of trees along the slanting streets. Of the red and yellow parasols in the Bandim market, which must be teeming with life at this hour.
I think I’d rather go out and get some air.
We can just say we’ll see each other later, Zé said. At the end of the afternoon.
Couto said yes.
At Diabaté’s place.
At Diabaté’s place, yes.
The thought of the tables in the open air had done him good. He knew it would be bright, and that he would be glad to see the others.
He hung up and lay back down.
Esperança came close, ran her hand through his hair, slowly stroking his head and his temples. Placed her hand on his hip like an anchor, a way of saying I’m here, I’m holding you.
Esperança full of grace.
Esperança who could name each white hair on his head and who baptized him with glorious names, hero’s names, my grizzled crazy Couto, my handsome black old man, my Mandinka whitened by the years who will soon look like a wise man but who thank God is still just a child.
Her top and her skirt were there, on the ground, beside their underwear abandoned on the linoleum. Sagging, pathetic. Balls of shapeless cloth.
She knew as he did what Dulce’s death meant. What patience they would both need before the news of this passing retreated from the space between them, faded, left them again to each other. And there was nothing to do but wait.
That devil woman you’re still in love with, she’d say, laughing, when one of Dulce’s songs came on the radio. That sorceress I’m powerless against.
Dulce’s voice would flow through the room, float between the walls around them, childlike, graceful.

Cars with pretty leather bucket seats,
Leave me be to walk in peace.

Order your copy of The Greats here.

Born in France in 1979, Sylvain Prudhomme grew up in Cameroon, Nigeria and Burundi before returning to Paris to study literature, and then becoming director of the Franco-Senegalese Alliance in Ziguinchor, Senegal, from 2010 to 2012. Contemporary Africa, where he lived and worked for so many years, is one of his major sources of inspiration. Sylvain is the author of six novels. Les grands (Gallimard 2014) was named the “Révélation française de l’année 2014” in Lire Magazine’s best books of the year, and won the Prix Georges Brassens and the Prix de la Porte Dorée. His most recent book, Légende (Gallimard 2016), was a finalist for the Grand Prix de l’Académie Française, and winner of the Prix François Billetdoux and the Prix Révélation SGDL.

Jessica Moore is an author and translator. Her collection of poems, Everything, now (Brick Books 2012), is partly a conversation with her translation of Turkana Boy (Talonbooks 2012) by Jean-François Beauchemin, for which she won a PEN America Translation Award. Mend the Living, Jessica’s translation of the novel by French author Maylis de Kerangal, was nominated for the 2016 Man Booker International Prize and won the £30,000 Wellcome Prize in 2017. Jessica grew up in Toronto, and after several nomadic years, will be once again using her hometown as her anchor. Learn more at www.jessicamoore.ca.