Women in Translation: In Conversation with Erín Moure | Book*hug Press 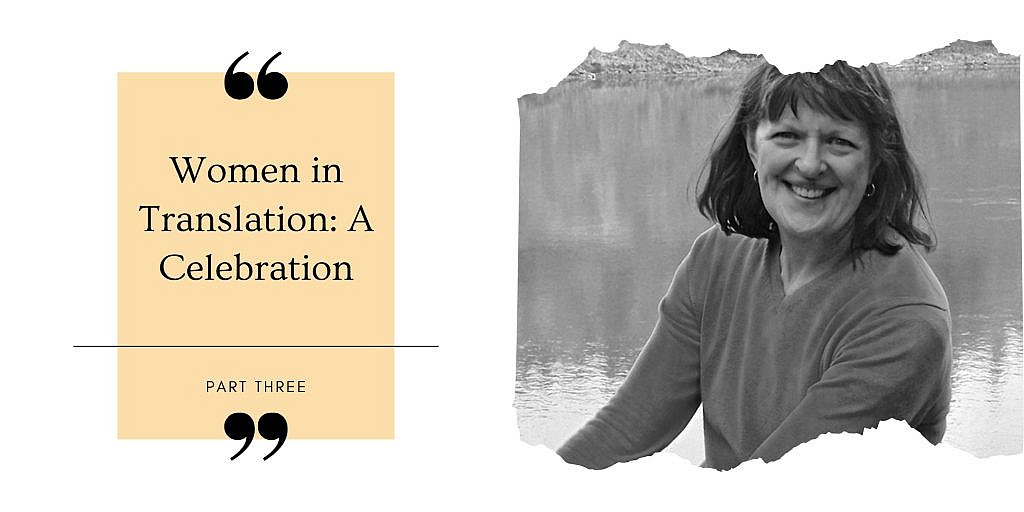 Our celebration of Women in Translation Month continues with a special collaboration! We talked to several women in translation about their work in the field, what attracted them to it, and their favourite translated titles and authors, among other things. Starting today, we’ll be sharing those insightful conversations on the blog. We’ll also be sharing excerpts from a selection of titles in our Literature in Translation Series*, so by the end of the month, you’ll be a master of translation. You’re welcome.

Our first interviewee, Erín Moure, needs little introduction. Her translations of French, Galician, Portuguese, and Spanish texts have received multiple accolades, and among Canadian translation enthusiasts—especially poetry lovers—hers is more or less a household name. Moure’s decades-long momentum shows no sign of waning this year: her translation of Chantal Neveu’s stunning long poem, This Radiant Life, is forthcoming from Book*hug on November 19, 2020.

* A reminder: Save 25% off all titles in our Literature in Translation Series until August 30th.

EM: Which people? Hard to say! How about: translation is a creative act, an art, and not a rote activity that serves artists. Even though Google Translate uses AI to search millions of texts in the target language (all those Google Books they’ve been scanning for years? Ah-ha!) and between some major languages it does a pretty good job at times if you can catch its errors (it’s like those maps readable only if you already know where you are going), it will never effectively translate poetry, especially, because a) there are always decisions to be made based on sound-values, etymologies, rhythms, registers, colloquial speech, “what the last line said,” “how I translated this in a prior poem,” etc., among other things outside semantic meaning, and b) all languages are rich with “productive” ambiguities that a reader in the original language doesn’t notice because the reader has culture, lives in that language. Google Translate has no culture. And can’t read the original like a human can. And can’t resolve the “productive” ambiguities so it just messes them up.

EM: I love the affectionate diminutives for names and nouns in Galician… –iña or ciña and –iño and –ciño. A cafeciño. My naiciña. A little coffee. My beloved Mom. Etc.

EM: The rich traditions of poetry outside of North American English that inform poetry in English, or could. They sure teach me more about poetry, its history, its references. And of course my second and third language give me insights onto only a tiny part of the world. Still, I do what I can! I love trying to bring what I read in Galician or French to readers who wouldn’t otherwise have access to it. Translation for me is a very intense and creative form of poetic practice.

EM: I’m working on my own poetry projects this year, as I haven’t been able to do that of late. Although, of course, translation always plays a role even in my own work. I’m trying to place three finished translations into English and French with publishers, and when Chus Pato finishes her current manuscript, I sure intend to translate it from Galician to English! It will be the seventh book of hers that I’ll have translated (hint: one was published by Book*hug in 2014!). 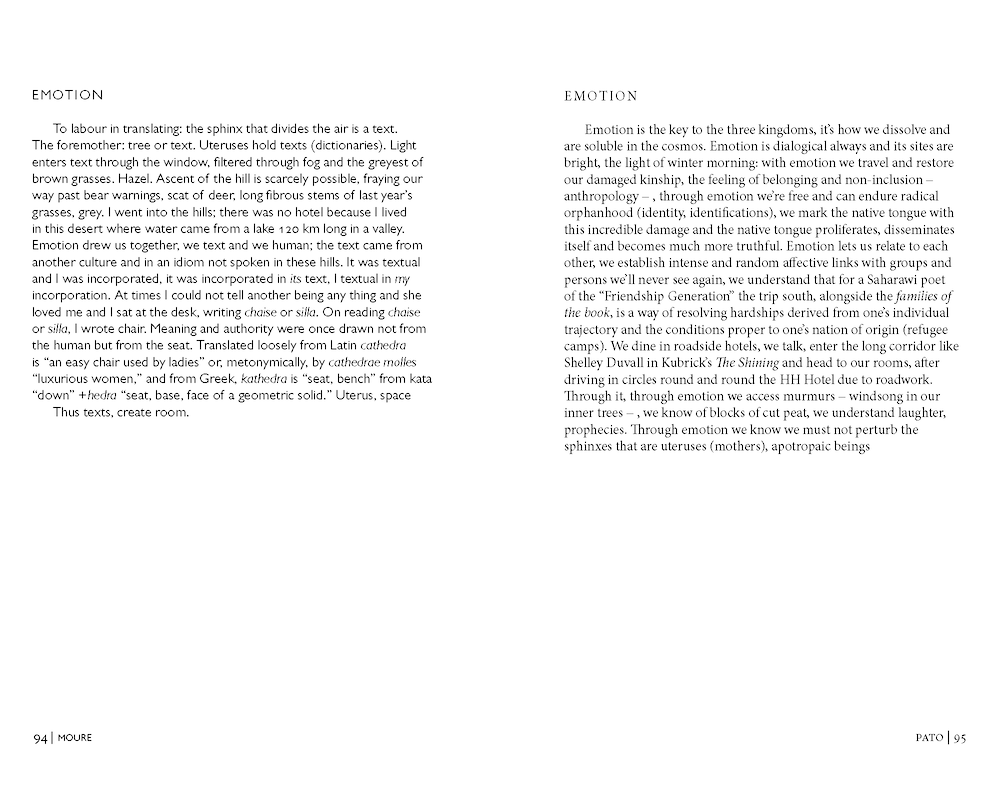 To labour in translating: the sphinx that divides the air is a text. The foremother: tree or text. Uteruses hold texts (dictionaries). Light enters text through the window, ﬁltered through fog and the greyest of brown grasses. Hazel. Ascent of the hill is scarcely possible, fraying our way past bear warnings, scat of deer, long ﬁbrous stems of last year’s grasses, grey. I went into the hills; there was no hotel because I lived in this desert where water came from a lake 120 km long in a valley. Emotion drew us together, we text and we human; the text came from another culture and in an idiom not spoken in these hills. It was textual and I was incorporated, it was incorporated in its text, I textual in my incorporation. At times I could not tell another being any thing and she loved me and I sat at the desk, writing chaise or silla. on reading chaise or silla, I wrote chair. Meaning and authority were once drawn not from the human but from the seat. Translated loosely from Latin cathedra is “an easy chair used by ladies” or, metonymically, by cathedrae molles “luxurious women,” and from Greek, kathedra is “seat, bench” from kata “down” +hedra “seat, base, face of a geometric solid.” Uterus, space
Thus texts, create room.

Emotion is the key to the three kingdoms, it’s how we dissolve and are soluble in the cosmos. Emotion is dialogical always and its sites are bright, the light of winter morning: with emotion we travel and restore our damaged kinship, the feeling of belonging and non-inclusion — anthropology —, through emotion we’re free and can endure radical orphanhood (identity, identifications), we mark the native tongue with this incredible damage and the native tongue proliferates, disseminates itself and becomes much more truthful. Emotion lets us relate to each other, we establish intense and random affective links with groups and persons we’ll never see again, we understand that for a Saharawi poet of the “Friendship Generation” the trip south, alongside the families of the book, is a way of resolving hardships derived from one’s individual trajectory and the conditions proper to one’s nation of origin (refugee camps). We dine in roadside hotels, we talk, enter the long corridor like Shelley Duvall in Kubrick’s The Shining and head to our rooms, after driving in circles round and round the HH Hotel due to roadwork. Through it, through emotion we access murmurs — windsong in our inner trees —, we know of blocks of cut peat, we understand laughter, prophecies. Through emotion we know we must not perturb the sphinxes that are uteruses (mothers), apotropaic beings