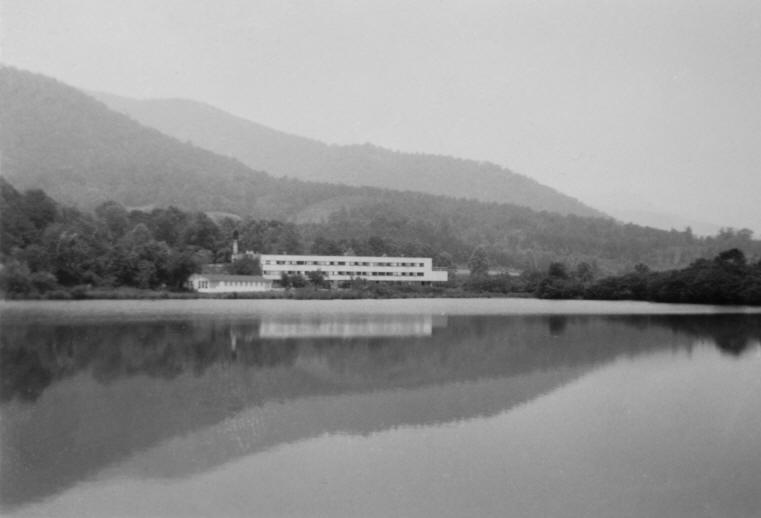 BookThug’s Department of Reissue proudly presents Jerrold Levy and Richard Negro’s postmodern collection Poems by Gerard Legro, edited with an introduction by Alessandro Porco. This new release will provide an exciting and subversive entry point for those newly-arrived at the poetics of Black Mountain College, and also, for those already familiar, it offers depth and complexity to the existing canon.

In the summer of 2013, while combing North Carolina’s Western Regional Archives, Alessandro Porco made a very peculiar discovery. Porco was investigating material relating to the poetry and poetics of Black Mountain College, an experimental liberal arts college that operated in rural North Carolina between 1933-1957. In his search, he exhumed a long forgotten manuscript titled Poems by Gerard Legro. The manuscript contained around a dozen short, enigmatic poems. What Porco found in Poems of Gerard Legro puzzled and disoriented him, claiming they were “very much unlike the poetry I associated with Black Mountain College”. One poem, “A Progression”, attempted to illustrate “the logical end to the poetic notion that a few foreign words make a poem more poetic” by creating an English poem that transformed incrementally into German. Another poem, “Can You Cant the Canto”, jabbed mockingly at Ezra Pound’s Cantos and was composed of fragments from the writings of Kierkegaard, Thomas More, Edward Everett, and Alfred North Whitehead. In another mysterious wrinkle, the author’s name, Gerard Legro, did not appear anywhere on Black Mountain College’s registry. Porco was left to wonder: Who is Gerard Legro?

If this is starting to sound like a Borgean detective story, you’re on the right track.

After some detective work, Porco soon found the answer. Gerard Legro was conceived in the spring and summer of 1949 by the playfully deviant teenage minds of two former Black Mountain College students, Jerrold Levy and Richard Negro.

Levy and Negro devised Gerard Legro as a playful hoax to artfully lampoon their professors, particularly Charles Olson and Josef Albers, for the amusement of their fellow schoolmates. But beyond the hoax, the creation of Gerard Legro served the two teens as a conduit for channelling their disillusionment of what they felt was the con job of modern poetry, a feeling that anticipated the postmodern literature to follow. This sentiment is captured in the inscription on Legro’s phony epitaph:

“Great works of art are often not understood, therefore the work of art which is not understood is often considered a great work of art… and this misconclusion allows the modern artist to exist.”

Porco’s introduction and explanatory notes are essential for getting in on Levy and Negro’s fun, as well as capturing the climate at BMC in the late 1940s when “the campus’s study rooms became smoke-filled poker dens, European classical music jumped to jazz, [and] friends slipped into sheets as lovers”.  Each poem is accompanied by detailed notes that illuminate some of the more inside jokes. For instance, in “Can You Cant the Canto” the surreal lines

refer to the bosoms of two mountains near the BMC campus, affectionately and collectively referred to as “Mae West”.

Porco also offers valuable insight into the method Levy and Negro employed while creating these poems. Originally the duo used a call-and-response technique, the authors alternating each line, but this proved too rigid and was abandoned for Dadaist collage. Fragments were lifted from a variety of sources and frankensteined into something fresh.

With the many portmanteaus, puns, doggerel rhymes (they rhyme “testes” with “nestes”), and mischievous imagery (“Summer’s subways lifting/ The subtle subterfuge of ladies skirts”), what becomes most apparent is how much fun Levy and Negro had creating their alter ego Gerard Legro. The result is resplendent in its irreverence and playful experimentation, and, despite its intent to mock, alive with shards of chance beauty.

Excerpt from Poems by Gerard Legro:

Praise for Poems by Gerard Legro:

“Beautiful Gerard Legro is alive. At Black Mountain College two students rebelled against their teachers, Josef Albers and Charles Olson, to create a mythic figure—part hoax, part avatar of disenchanted youth—who is entirely their own.… These poems are a vital addition to the history of the extraordinary educational experiment that was Black Mountain.” —Kaplan Harris, co-editor of The Selected Letters of Robert Creeley

“The literary history of Black Mountain College has received a useful amplification and illumination in the form of Poems by Gerard Legro…. Through his detailed and insightful introduction, and in his careful annotation of both the poems and the circumstances of their composition and (non-)dissemination, Alessandro Porco equips the contemporary reader not just to get the joke(s), but also to appreciate the significance of a fascinating project, equal parts homage and satire, that has too long languished in archival storage. A valuable recovery.” —Steve Evans, coordinator of the New Writing Series at the University of Maine

“Alessandro Porco has rescued a collaborative work of poetry that is emblematic of the efficacy of the teaching methods at Black Mountain College. For it was at Black Mountain in 1949 that Jerrold Levy and Richard Negro, two undergrads, in the best transgressive prankster tradition, combined to become Gerard Legro. Despite their worst intentions, they created real poetry—‘Or in Summer’s subways lifting / The subtle subterfuge of ladies skirts’—if only they’d been able to follow it. Their Albers poem is actually beautiful in its limitation. Porco’s impeccable scholarship allows readers finally to appreciate Legro’s steps and missteps.” —Vincent Katz, editor of Black Mountain College: Experiment in Art

Order Now! Get your copy of Poems for Gerard Legro here.

Alessandro Porco is a poet, critic, and scholar from Toronto, Canada. He earned his Ph.D. from the State University of New York atBuffalo. His research focuses on twentieth-century poetry and poetics. Porco lives in Wilmington, where he is an Assistant Professor of English at UNCW.

Jerrold Levy (b. 1930 – d. 2002) was born and raised in New York City. He is the grandson of poet Mina Loy and son of art dealer Julien Levy. He attended Black Mountain College from 1947 to 1950, studying under Ilya Bolotowsky, Merce Cunningham, and Charles Olson. In 1959, Levy received his Ph.D. in Anthropology from the University of Chicago.

Richard Negro (b. 1929 – unknown) grew up in Fair Lawn, New Jersey, a suburb located twenty-five miles outside New York City. He attended Black Mountain College from 1947 to 1950 and was a star pupil of physicist Natasha Goldoswki and poet M.C. Richards. He later studied physics at the Carnegie Institute of Technology in Pittsburgh, Pennsylvania.