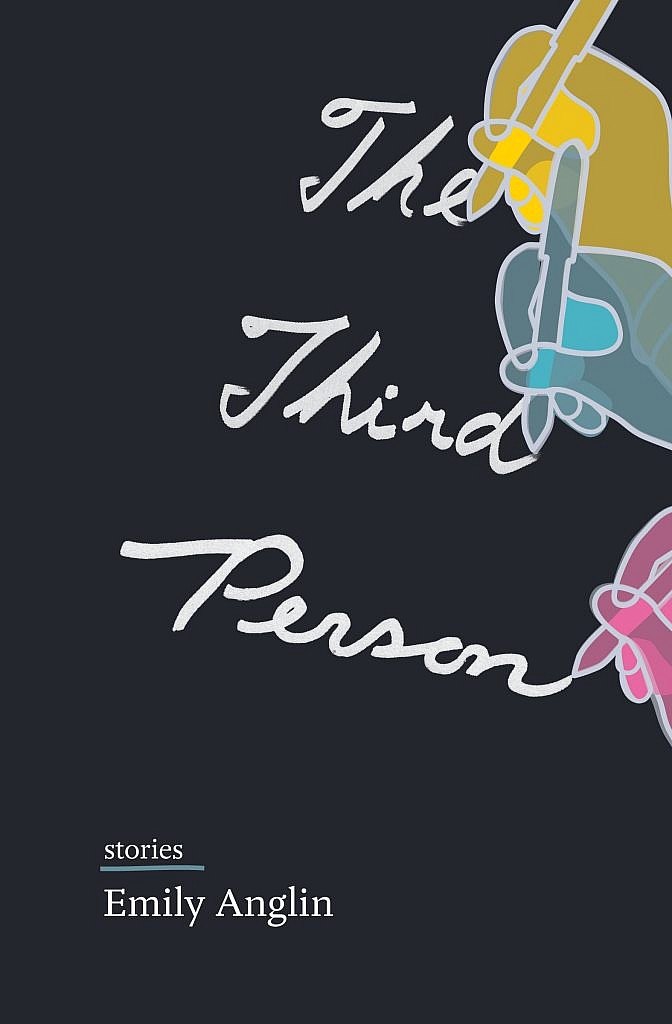 In Anglin’s debut collection of darkly humorous and uncanny short stories, a sequence of tense professional and personal negotiations between two people is complicated when a third person arrives. Within these triangulated microworlds, disorienting gaps open up between words and reality: employees dissolve from job titles, neighbours overstep comfortable boundaries, voices distanced by space or time make their presence felt. Uneasiness builds among these separate but entangled lives. The Third Person, which 49th Shelf named as one of the Most Anticipated Books of Fall 2017, reveals how people can become complicit in these milieus, even desire them, often while being led into the loneliness they can instill.

The Globe and Mail writes that “each of these stories feels like it could go in the direction of the weird and otherworldly, but then that ends up not being the point. The true source of the uncanny, The Third Person seems to say, isn’t the paranormal—it’s other people.” In a review for Room Magazine, Jessica Rose writes, “Anglin masterfully draws on the familiar, creating worlds that readers will quickly identify, until these worlds begin to fall apart. Anglin’s controlled yet nuanced voice is refreshing, and a welcome addition to the short story genre.”

Anglin reads an excerpt from “Fortified Wine,” a story from the collection, in the following audio clip:

When my friend Richard got the news that he would be moving to Maine to take a two-month-long painting master class, he offered to let me stay at his apartment while he was gone. I’d been wanting to leave my apartment anyway, because the building was for sale and prospective owners were always coming through to look at it. It was good timing. And I could keep an eye on Richard’s art for him, which would bring him peace of mind. We’d been friends since we were kids; we’d both grown up in the same mid-sized town and both moved to the nearest big city, in his case to go to art school, and in my case for a job in fundraising for an art gallery, which I’d left soon after; I’d been drifting from job to job since then.

Richard left me a note on the hall table under a bottle of wine, telling me how glad he was that I’d be keeping his paintings and sculptures safe, and staying in his place. The brand of the wine he left me on top of the note was Vera—my first name.

Richard had never actually had a break-in. But his apartment had a slightly unnerving story to it, which he’d explained still made him slightly nervous about leaving it unoccupied. One night a few days after he had first moved in, about two years back, he’d been reading on his couch and noticed a trail of smoke rising past his back window. He got up and looked out the window, down into the alley behind the building, and saw a stranger. This stranger had been sitting and smoking halfway up the fire escape that led to his balcony.

The next night, she was sitting there again, in the same place, and then again later that week. He hadn’t seen her face, but had noted her coat, its unique shade of green, the way her hair spread in a fan across the coat’s shoulders, the solid, still way she sat, her lifting and lowering arm holding the cigarette. And then, after not seeing her for a few nights, he saw her again. In the street, during the day. In front of his place, in the same coat, with the same hair, ahead of him, walking away, quickly. And then she was gone. Though he hadn’t seen the woman since that time, he still mentioned her occasionally; I could tell that as much as he seemed to like having the story to tell, he had never felt entirely comfortable in his apartment, or leaving it empty, because of it.

Richard’s apartment was quiet and full of art. I spent my first few nights there alone, sipping tea in silence on his low, green couch, looking at his paintings and sculptures, his curtains and knick-knacks, the lamplight coloured by tinted lampshades. I marvelled at how cozy solitude could feel, away from the company of my own possessions, which I’d moved with me from place to place since university, and which now sat in storage on the other side of the city, along with some items I was saving to sell.

Richard was a slightly distant person who kept to himself, and I had never fully felt able to trust him, despite how long we’d known each other. But I’d accepted our quiet friendship for what it was. He had accepted me as I was too, despite some bad choices I’d made in recent years. When I’d had to leave my last job, he got me a job at the department store where his father was a manager; I’d walk the fluorescent aisles, picking up clothes that had fallen from their hangers, and direct people to the sections they were looking for. Richard would come by and visit me, and eat with me in the food court of the mall. I’d left shortly after I began, but it had helped a lot. Now, I accepted Richard’s offer to stay at his apartment with a bodily relief about my own finances that carried me like new strength, letting me walk faster and pick objects up with less effort: my things, Richard’s things, pen and paper for planning. I felt closer to Richard with him gone than I ever had when he was here.

Emily Anglin grew up in Waterloo, Ontario, and now lives in Toronto. Her creative work has appeared in The New Quarterly, the Whitewall Review, and in the chapbook The Mysteries of Jupiter. She holds an MA in Creative Writing from Concordia University and a PhD in English Literature from Queen’s University, and also completed a postdoctoral fellowship with the University of Michigan’s English department. Prior to her graduate studies, she studied English at the University of Waterloo. The Third Person is her debut book.