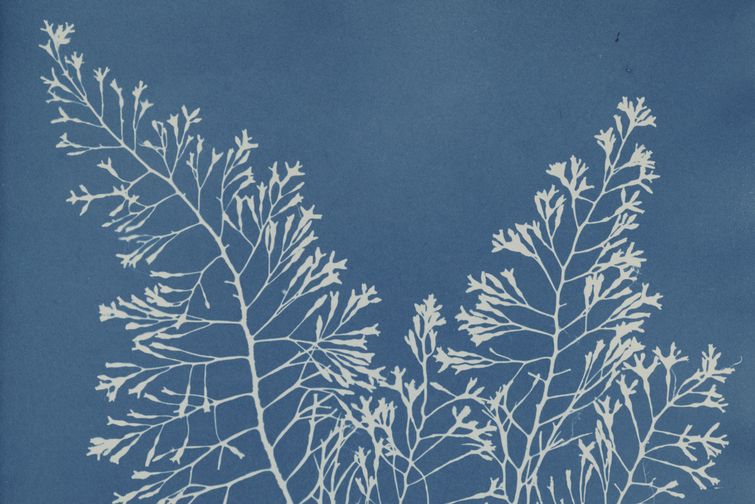 On this, the eve of the announcement of the winner this year’s Governor General’s Award, BookThug’s intrepid intern Rick Meier sat down to talk with Julie Joosten about her shortlisted collection Light Light. Read on, and learn about Anna Atkins and other lesser-known voices in a history of science more than three hundred years long that found their way into Julie’s work.

1. First off—congrats on Light Light being shortlisted for the Governor General’s Award for poetry! What, if anything, has publishing your first book of poems taught you about poetry?

Thanks for the congratulations.

I haven’t learned a lot about poetry from publishing my book; I’m perhaps beginning to learn things about the communities in which poetry circulates and the ways it does or doesn’t circulate.   Though even these learnings are vague.

2. The cyanotype images featured on the cover and throughout the book are from Anna Atkins’ Photographs of British Algae. Can you tells us a bit about how you discovered Atkins’ photographs? When did you decide that her photographs would become part of the book? Were there images from Atkins’ book that you wanted to include but did not?

At an impasse with my manuscript, I decided to go to the University of Toronto’s Earth Sciences Library—I gratefully, felicitously stumbled across a book of Atkins’s prints there.  I was immediately moved by their strangeness and beauty.  The photographs of the plants range from the ornate to the abstract and they all seem, in different ways, haunted.  Haunted surfaces.  I could have used so many of the images, choosing was painful.  And also exciting.

3. Light Light’s cast of female intellectuals, including Lady Mary Wroth (1587–ca.1651), Maria Sibylla Merian (1647–1717), Dorothy Wordsworth (1771–1855), and Anna Atkins (1799–1871), collectively represent about three hundred years of intellectual history, from the Renaissance to the Industrial Revolution: epochs associated with themes of scientific progress, Enlightenment, modernization, and revolution. Can you tell us a bit about what attracted you to these women, and how they found a way into your work? Were you initially drawn to the figures themselves, or by the historical/intellectual milieus from which they emerged?

I was originally drawn to their work, which led me into their historical milieus, and to the networks they traversed and explored.  I was fascinated by their dedication, resolve, talent, their ways of seeing and their willingness to alter conventional modes of perception and attention.

4. I’ve read at least one review of Light Light in which you are applauded for subverting patriarchal narratives of the history of science by featuring characters like Anna Atkins and Maria Sibylla Merian alongside famous dead white males like Darwin and Thoreau. You also mention your indebtedness to the work of Londa Schiebinger, an historian of science and a leading authority on the role of gender in the sciences. Was your invocation of lesser known female researchers/thinkers intended to subvert or revise established narratives of intellectual history?

Subvert, revise, open out, remember, reimagine . . . and to recall the people, often slaves and indentured servants, who aided their work but weren’t able to leave recoverable names.

5. If people wanted to read more about the characters, the ideas, and the science featured in Light Light, what are some “suggested readings” you might assign?