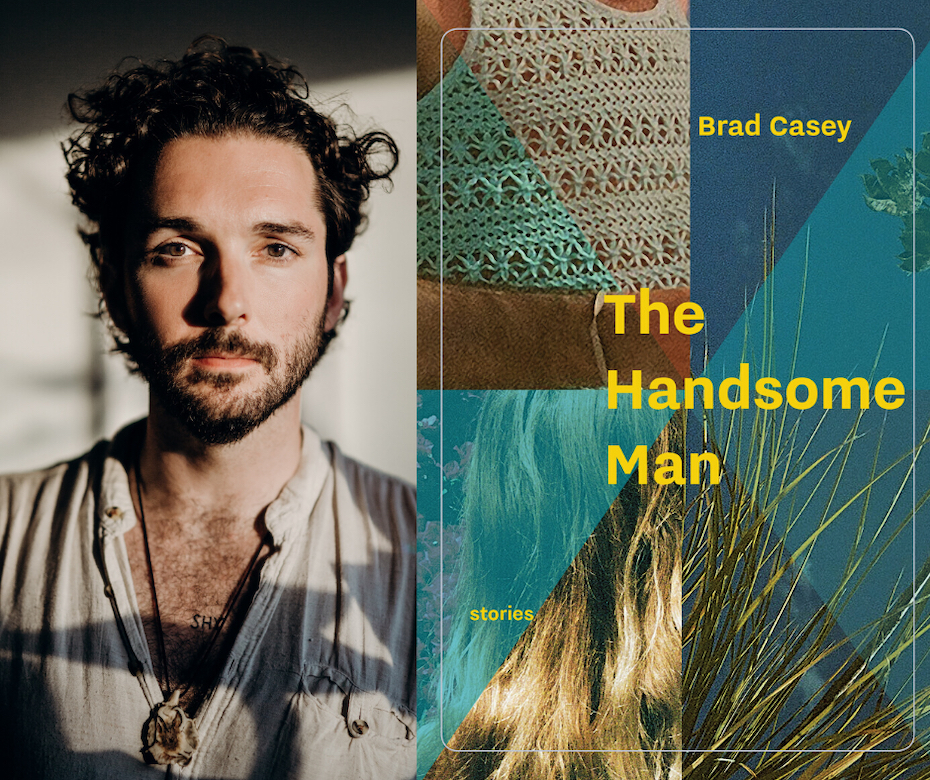 “Writing is like a form of meditation for me, it’s good to just have some ambient noise, a quick reading of something I love to clear my mind then just start.” —Brad Casey

Brad Casey’s first short story collection, The Handsome Man, exists in a near-forgotten world in which travel is normal. (I know. It’s weird.) The book’s protagonist shares Casey’s wanderlust, which, thankfully, the pandemic has only disturbed rather than devastated. Though his body may be limited—and only immediately—our interview makes it clear that Casey’s mind and soul are still traveling.

How has the pandemic affected your writing?

Before the pandemic struck I was working twelve hour days, I barely had any time to write and when I did it was pretty structured. I was very out of practice. When I got laid off, though, it took me some time to get back into practice. I remember people were writing things on Twitter like “Shakespeare wrote King Lear during the plague” or “You don’t have to write anything right now, don’t feel pressure to produce!” and I felt like it was all bullshit. I’m reacquainting myself with my practice and that’s really important, as the weeks pass and I write longer journal entries and make time to write poetry I’m finding myself becoming confident as a writer again, just taking the treatment of my practice, again, with the respect it deserves.

How has it affected your reading?

I’m reading so much. More than writing I’m reading, which is very exciting. Lots of socialism and spirituality; The Letters of Rosa Luxemburg, The Nag Hammadi Scriptures, Be Here Now by Ram Dass, Sex After Fascism by Dagmar Herzog, The Faggots and Their Friends Between Revolutions by Larry Mitchell. I’m excited to see how I synthesize all the information I’m taking in right now.

What do you miss?

Just before the lock down I went to my favourite coffee shop, The Common, hoping to run into someone I knew. There wasn’t anyone there so I sat down to read the last book of Elena Ferrante’s Neapolitan Novels. About half an hour later my friend Jana came in and said “Hey! I was hoping to see you here,” and she sat down with me and we talked for about a half hour. Then she left. She didn’t even buy anything. That’s what I miss most. Tender, unplanned conversations. Running into people you love. For me, this city is hard to bear without the social circles, the people I love so much, that lie beyond my most intimate friends.

Who do you miss?

I really miss my friends in Montreal and New York. All my crushes live in Montreal. All my favourite writers live in New York. I am lucky to live where I live but damn, free movement and freedom to congregate, that’s what I miss most.

What book—or books—would you recommend to a friend right now and why?

I’m almost finished reading The Conquest of Cool by Thomas Frank, it’s very good. It’s about how the advertising industry appropriated the aesthetics of the counter culture (and fabricated some of it too) of the 1960s, basically selling us an idea of freedom that is tied to consumerism. I am constantly seeing, right now, bad faith actors and corporations appropriating the language of, for example, the #metoo and leftist movements, the language of self-care and social justice. This book is making it easier to understand why they do this and how to distinguish between people selling something and people speaking sincerely.

If you’re a writer who thinks you need to drink or take Adderall to write: you don’t. It’s a myth. I’m no sobriety proponent; if it works for you it works. As long as it’s not causing problems in your personal life, go for it. But you don’t need anything to write well. Nurture your inner life, study some narrative forms, do some poetry close readings. Writing is like a form of meditation for me, it’s good to just have some ambient noise, a quick reading of something I love to clear my mind then just start.

I’ve been listening a lot to Matt Christman’s live streams, he’s a leftist podcaster who’s been doing these daily hour long question and answer sorts of rants from his apartment in New York through the lock down. Since Bernie Sanders suspended his campaign a lot of leftists have been feeling unmoored, without a central focus, and that feeling has intensified with the alienation of the lock down. He recently talked about the red pill/blue pill/black pill kind of dialectics and said the best thing for us to do now is take the grill pill. Stop focusing on those things outside your control (like electoral politics) and start focusing on doing something, anything, to make yourself happy. Like grilling. Just stand at the BBQ (literal or metaphorical) and grill. It’s helped me gain some perspective. Personally I’ve started relearning French. Just sitting on my living room floor, me and my friend Duolingo, every day. Focusing on anything to better myself makes me happy right now, even if there is no end goal to it all.

I hate to answer this with a cliché but honestly I would have kept writing it if only for the fact that I had a deadline. If it was coming out next year I’d still be writing and refining it. Nothing is ever finished, you just have to find peace inside yourself in letting it go and trust that you’ve communicated what you’d hoped to communicate.

When I got the only grant I’ve ever received the first thing I bought was this long dress jacket that’s black with intricate flowery designs and mystical symbols and it’s so beautiful and it was so expensive and I’ve never worn it in public even one time.

Brad Casey is a Toronto-based writer and photographer. His debut book of poetry, The Idiot on Fire, was published in 2016. He is a former staff writer for VICE, and has had numerous articles published internationally and in dozens of languages. In 2014 he founded and was Editor in Chief of the limited-run literary journal The 4 Poets. His writing has appeared in Hobart, Peach Mag, The Puritan, BAD NUDES, GlitterMOB, and more. He has organized reading events and performed his work in Toronto, Montreal, New York, Los Angeles, Berlin, and Gothenburg.