“Creatures like ourselves”: In Conversation with Cary Fagan | Book*hug Press 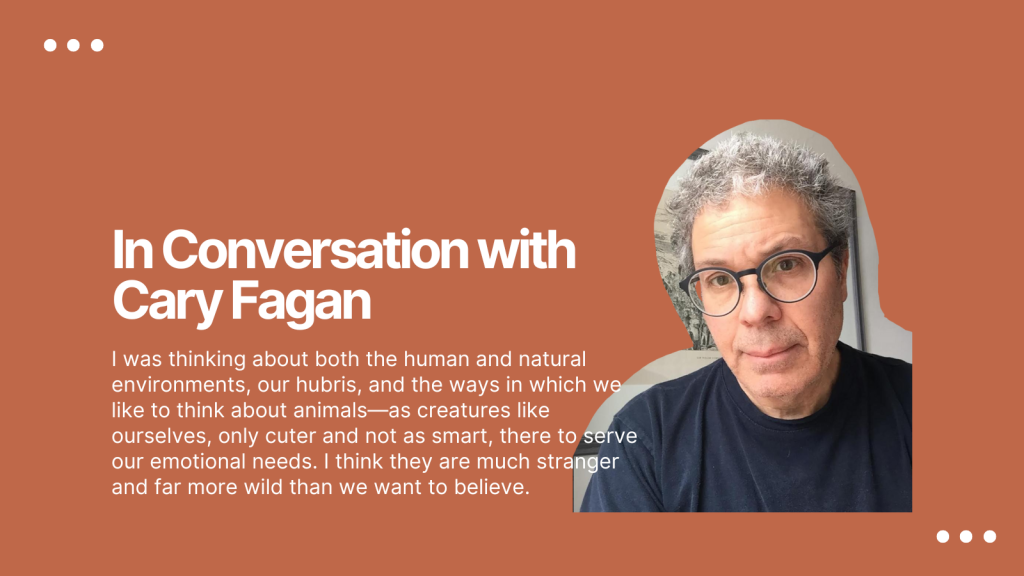 Today, we are featuring our interview with award-winning author Cary Fagan about his new novel, The Animals.

A realist novel with the air of a fairy tale, The Animals is a surprising, funny, and thought-provoking story that explores the nature of relationships faunal and human, and reminds us of the challenges of finding one’s place in society.

In a quaint tourist village, Dorn makes miniature scale models displayed in the local shops. Life takes a strange turn when the government-sponsored “Wild Home Project” is introduced and wolves, rats, minks, otters, and bears move into villagers’ homes. Soon, Dorn receives a mysterious commission, finds a body in a park, and has several run-ins with a former classmate-turned police officer. When fire breaks out, Dorn takes on the unlikely role of hero in the hope of changing the course of his life.

In the following conversation, Fagan shares his inspiration for writing The Animals—an unexpected poetry discovery—and digs deep into the novel’s big themes and central characters.

B*H: In addition to your work as a novelist, you are an acclaimed children’s book writer. Did your experience writing for children inspire you to compose this playful and fable-like book?

CF: Certainly my writing for children has influenced my adult work and vice-versa—in fact, long before ‘The Animals.’  The greatest influence here, I think, is not so much in the story but the form.  Like many of my kid novels, ‘The Animals’ is a very compact book, making use of short chapters that allow me to propel the story forward, make leaps in time, and heighten the drama.

B*H: How did the concept of living with wild animals occur to you?

CF: My wife Rebecca and I were staying in New York for a while she was teaching a course at NYU.  I know there are several sources for this story, but one is a small book of poetry I picked up at random at the Strand.  Joshua Poteat’s For the Animal.  This is a strange surrealist poem with lines such as “For the animals gives us a way to reason with God” and “For the animal surveys the atmosphere from a ladder of withering blood.” I really wasn’t sure what to make of it and the animal isn’t really an animal but it did make me think about the power that our idea of animals and the wild have for us. The poem wasn’t so much an influence as it was a spark lighting my own fire.

B*H: Is the act  of taking animals into the home a comment on our environmental impact? Our inability to leave nature be?

CF: I’ll say—sure.  Like most writers, I am loath to interpret the meaning of my own work. I work hard to create a story that is open and suggestive and thought-provoking. If I say it is about this or that I only shut down its possible meanings for the reader.  But I was thinking about both the human and natural environments, our hubris, and the ways in which we like to think about animals—as creatures like ourselves, only cuter and not as smart, there to serve our emotional needs. I think they are much stranger and far more wild than we want to believe.

B*H: Dorn—the protagonist—is characterized as extremely average. He has “accepted the rules of the world,” and has never felt a need to stand out. At the same time, he has a highly unusual day job constructing miniature models. Why did you assign him this role?

CF: For one thing, it’s more fun to give him a peculiar and interesting job than a boring one.  For another, I myself enjoy making things and like to daydream that if I wasn’t a writer I would be an artisan of some kind.  But it’s more specific than that.  Dorn, really by accident, discovered a way to make a semblance of a living by taking advantage of the historical quaintness of the village, creating miniatures that appeal to tourists who visit its shops.  He is both alienated from and very much a part of this place.  And his work, while making him almost a minor celebrity, adds to his isolation and sense that somehow he is a failure.

B*H: Grief and loss haunt the novel. Dorn’s mother passed away when he was young. His neighbour Leev is grieving a divorce. And Dorn himself laments missed romantic opportunities. What do these various forms of loss say about living in community?

CF: If there’s one thing that I think my writing is always about, it’s how we attempt to define ourselves and find our place (or fail to find our place) in the society we live in.  Before reading your question, I did not add up these moments of grieving, as you call them, but I can see it—the way the characters’ sense of loss and missed chances haunts their ability to find meaning and happiness.  It’s probably also true that taking an animal into one’s house—that surely is an attempt, however misguided, to fill a deeply felt need or absence.

B*H: The Animals is marked by the elusive presence of Horla, a famous author who lives in town, but rarely shows her face. Does Horla stand in for the writer at large?

CF: I do not think generally or metaphorically or symbolically, at least not consciously.  I think much more concretely.  One of the pleasures of writing ‘The Animals’ was creating the culture of this particular village and the larger country.  I think, yes, they would have a café where the servers wear elf costumes.  Yes, they would have their own funeral rights.  Each of these things is an opportunity to grow the story.  And yes, they would have a writer who sprang from this same land and community but whose work is notoriously unpleasing to many.  The villagers are proud of having someone so famous among them and extremely wary of her at the same time.  I could see her very precisely, down to the prose in her own (much more difficult) novels.  I felt delight in “finding” her and then trusted that she would take her place in the story.  I didn’t know when I started that Dorn would eventually meet and be able to speak with her.

B*H: Why does Horla write a children’s book as opposed to one of her usual “difficult” novels?

CF: Well, she tells Dorn that she did it for the money, which surprises him.  But the picture book is a very expansive form—it can take virtually anything as its subject, unlike a children’s novel which needs to be about a kid.  It struck me as a good form for Horla.  Again, I didn’t begin the novel knowing she would write this book or that I would describe its story in some detail.  It is a very peculiar picture book and somebody says he’d never let his own child read it.  There is a very interesting review of The Animals on Goodreads in which the reviewer writes about trying to see how the picture book story ties into the book as a whole.  I rather deliberately did not tie things up neatly that way.  One of the things I like about novels is how much they can hold.  I hope that Horla’s picture book is another dark blossom opening up in this particular bouquet.

B*H: What gives you courage or confidence as a writer?

CF: I began writing stories seriously when I was twelve years old.  But it was a long time before I realized that, in spite of having been an average student in school and a rather shy kid, I always had confidence about my writing.  I think it was my parents who gave me that.  Loving, supportive people.  Of course as one grows up and tries to survive as a writer, it’s a different matter.  I certainly feel up and down in terms of my career.  But what has kept me going is quite simply the joy and exhilaration and sense of purpose that I experience while I am writing.

B*H: What do you hope readers will take away?

CF: I consider myself first of all a storyteller.  I want to hold the reader’s attention.  I want them to lose themselves for a moment and feel something.  I attend very closely to my style—I love the very feel of words, sentences, paragraphs—but I don’t want it to interfere with that falling into the world of the book.  And when a reader finishes it and puts it down?  I’d like it to take a moment or two before they are able to return to their real world.  Whatever else they take from it I think is a very personal experience.