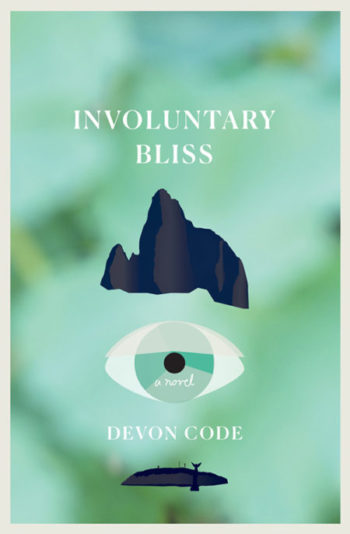 In Involuntary Bliss, the first novel by Journey Prize winner Devon Code, a bond between three friends forms over a mutual fascination with an obscure Peruvian novella and is fractured by an accidental death.

Set over one hazy weekend in late August, an unnamed narrator visits his troubled friend James in  Montreal following a gap of many months. The two young men are set adrift in the city by way of James’s memories, which flow out of him as lush set pieces—an affair, a stint volunteering at a children’s hospital, a striptease show—assembling a picture of James’s haunted life in the wake of their close friend’s death.

In this latest edition of our “In Conversation” interview series, BookThug’s own Fiction Editor, and author of Job Shadowing, Malcolm Sutton chats with Devon about the notion of involuntary bliss, field research he did for the novel, themes of friendship and mortality, and more.

Malcolm Sutton: As we read Involuntary Bliss, a twenty-something named James leads us and the novel’s narrator to locations in the city of Montreal – an apartment, the Mountain, a vernissage, a strip club. Yet you begin the book with an unlikely and comic scene that takes place at a children’s hospital. Can you tell us about how this opening scene came about? Did you research for it?

Devon Code: Though it is entirely fictionalized, the scene was inspired by my own experience volunteering at a Children’s Hospital as an undergraduate student. Once a week I would make the short walk from campus to the hospital and spend a few hours there, usually playing with school-age children. It was a refreshing change to spend time in an environment that was so different from the headiness of classes in literature and theory. I was struck by in some cases how ill the children were, but also how they were still very much children, intent on having fun. I was hospitalized myself for a while when I was six, and my experience as a volunteer provided a window on those distant memories.

On one or two occasions there was a shortage of volunteers in the nursery and I was asked to spend my shift there, holding infants. This scene was one of the last ones I wrote for the novel. It didn’t occur to me until quite late in the writing process that showing James and Warren spending time together in this way might make for a good opening.

MS: There’s a movement in Involuntary Bliss that is unlike many novels. I’m not sure how to describe it. In some ways it feels like a single breath, or a dream that fades seamlessly from one scene to the next. And there is often a disparity in place between where the narrator is and where the action of a scene is – a doubling of place. Can you tell us about this style that you developed and what it allowed you to do in terms of narrative? What other novels influenced you in writing this?

DC: I’m pleased that you used the term ‘movement’ in reference to the approach to event in the work. I am fascinated by novels that have what I would describe as sustained momentum, a force that keeps me turning pages in spite of an unconventional approach to plot or storytelling. I was trying to accomplish something like this. Works I would describe in this way include most of  Thomas Bernhard’s fiction, W. G. Sebald’s books, and Roberto Bolaño’s By Night In Chile. I am strangely exhilarated by an unexpected but thematically or symbolically relevant digression, or a circuitous, tangential approach to structure.

I am also fascinated by dream logic, how our unconscious mind finds relations between seemingly disparate memories, ideas, anxieties. Franz Kafka and Haruki Murakami at his best (in The Windup Bird Chronicles, for example) are two writers who achieve a deeply compelling dream-like logic in their fiction. This is no easy feat, as anyone who has ever been been bored by an overly-enthusiastic account of someone’s else dream can attest to.

In terms of the displacement between physical location and the events that occupy the mind, this to me is simply the experience of reliving memories or telling stories (or dreaming, for that matter), which are central and closely related human activities. In fiction, this displacement creates the opportunity for dramatic tension, which is particularly important in the absence of a conventional linear plot. In terms of developing this style, it happened very slowly, over the course of about six years and much rewriting accompanied by reading and rereading works by the above-mentioned writers.

DC: As alluded to by the novel’s epigraph, the title is borrowed from a phrase used by Friedrich Nietzsche in Thus Spoke Zarathustra. In the context of my novel, involuntary bliss is not necessarily meant to have the same meaning as it does in Nietzsche’s text and the denotation of the term is not disclosed. I agree that there is something foreboding about the phrase, as there potentially is about any experience or sensation that we don’t have control over.

Literature, especially challenging or unconventional texts, requires imaginative and intellectual investment on the part of readers. This, I think, can make the bond between people who share enthusiasm for the work of a particular writer especially powerful. They have put some of themselves into the encounter with the writer’s work and have come away moved or changed. When one has an encounter like this it is natural to want to discuss it (even if one is an introvert, as the novel’s narrator arguably is), to connect with others who have been affected by the work in the same way.

MS: As much as this is a novel about friendship, it is also a novel about working through a friend’s unexpected death. Would it be true to say that mourning is confronted in an oblique way by the characters? Do socioeconomic factors, like James’s (the central character’s) precarious employment, hinder this difficult process?

DC: The novel deals with the challenge of coming to terms with death for the first time. Any youthful illusion of immortality has been dispelled for the protagonist just before the novel begins. James has to learn how to grieve as he grieves. As your question suggests, this challenge is compounded by James’ uncertainty about where his own life is going in terms of vocation, education and employment. He strives to honour his close friend’s short life while figuring out how to live his own. He also learns quickly that balancing employment and a commitment to making art is very difficult.

MS: What comes next?

DC: I have some ideas for what I’d like to do in my next novel and am anxious to get started on it. While writing Involuntary Bliss I also wrote a fair bit of darkly comic short fiction, much of it very short and resembling parables, fables or aphorisms. Some of this work was recently published by Found Press. I conceive of an eventual book-length collection in this vein tentatively entitled Misgivings.

Order your own copy of Involuntary Bliss here.

Devon Code is the award-winning author of fiction, short stories, and critical reviews. In a Mist, Code’s first collection of short stories, was longlisted for the 2008 ReLit Award and was included on The Globe and Mail’s “Best Books” list. In 2010, Code was the recipient of the Journey Prize for his story “Uncle Oscar.” His reviews of literary fiction have appeared in The Globe and Mail, National Post, Quill & Quire, and Canadian Notes & Queries. Originally from Dartmouth, Nova Scotia, Code lives in Peterborough, Ontario. Involuntary Bliss is Code’s first novel.