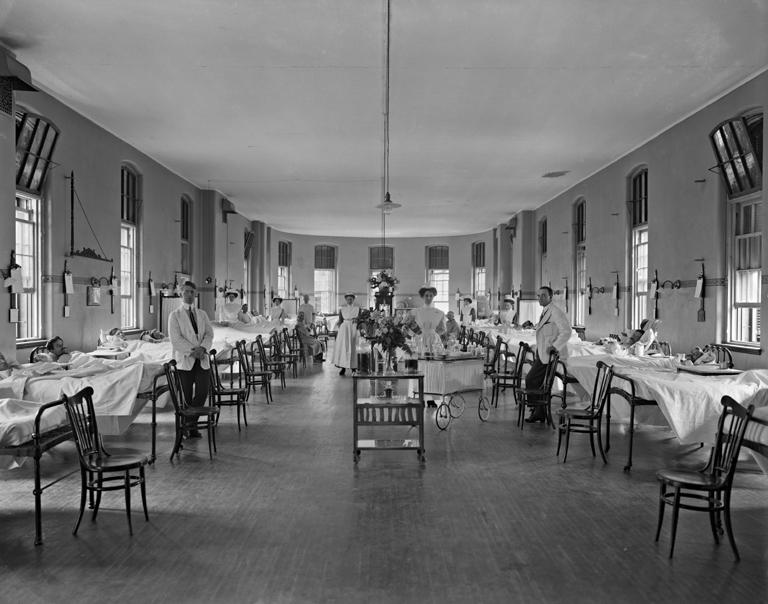 In Robert Anderson’s debut chapbook The Hospital Poems, the ward becomes the world, becomes the word, becomes the war. Drawing the reader into the strained intimacies of hospital halls and personal and social breakdown, Anderson’s fragmented, fragmenting poems are “spills/spells of narrative” that brilliantly sabotage the institutional from the inside.

Selected for BookThug’s Summer Chapbook season, this emotional collection confronts the crises of our pathologized and psychiatrized selves. Amy Loyst, an English Master’s student, recently sat down with Robert to discuss his personal collection The Hospital Poems.

Robert will be reading from The Hospital Poems, Wednesday June 10, 2015 at the BookThug Summer Chapbook Launch Party. The event takes place at Videofag (187 Augusta Avenue, Toronto), and will feature additional readings by Helen Guri, Lisa Gordon, and an audio appearance by Rachel Rose. The event will run from 7:00-10:00 PM. For more information, or to RSVP, visit the FB event page here.

You can also hear Robert read on Wednesday June 24, 2015 at Who You Really Are: A Poetry Reading featuring Jennifer LoveGrove and Robert Anderson. The event takes place at The Belljar Cafe (2072 Dundas West, Toronto). For more information, or to RSVP, visit the FB event page here.

AL: What is it about hospitals that inspired you to write this collection? Do you have a background in medical or psychological disciplines that aided in the writing of this piece?

Since I was 17 years old and took my final year of high school in the hospital I’ve spent a lot of my life being in or affiliated with the hospital in one way or another. In a way, it’s given me the only sense of community that I’ve ever known. Over 10 years ago now I was being shuffled around the hospital system for about 4 years. I had lost all sense of identity. I was suffering from Post Traumatic Stress Disorder.

When you suffer from PTSD, your thoughts tend to spin around obsessively in your head. Things in your life that happened 20 years ago feel like they happened yesterday. When you have a long psychiatric history, the hospital system kind of gives up hope on you, especially as you get older. I had become way too dependent on the hospital at this time and wasn’t able to cope on my own. From spending so much time of those 4 years in the hospital, many of the relationship problems I had developed over the years ‘in the real world’ I began playing out in the hospital.

That is why you see so many female names popping up in The Hospital Poems. Some were from the hospital, others from the not too distant past. It all began to merge in my mind. When I was on the day program, I’d be at the hospital during the day and home in the evening and on weekends. It became a bizarre lifestyle. The only salvation I would find would be in returning to being an artist and a poet. I continued with my art photography during this time and the first poem in the series I wrote was the one called “Zoe.” She was a young woman I knew at Art College who had a terrible life. Once I wrote the poem, I found all the upsetting emotions I had about the whole experience, that whole art lifestyle that was part of the scene, began to leave me. I wrote it in an abstract style that I thought was faithful to her as a person, something she would like. So this really began my long journey back, back to some kind of life. I began writing poems again. My mind began to clear. People who suffer from PTSD often describe the experience as being on the other side of something, not being able to define what that “something’ is. I refer to it in the poem “Plato’s Ward” as “the other side of there.” And there is no outside ward.

I have no psychological or medical background. But from all my life of being part of ‘the system,’ I could pretty much run the groups in the hospital.

AL: You experiment a lot with form in this chapbook and I was wondering how you progressed through the collection through form as well as content, and whether the composition happened organically or if there was more of a strategic way you went about setting up the collection.

RA: From being a graduate English student of Frank Davey from way back when, I became very much aware of the question ‘how do you articulate an experience?’

Anthony Easthope’s “Poetry as Motion” was the course textbook and it had an enormous influence on me. So did the essay I wrote for his class on another former teacher of mine Eli Mandel. Mandel really explored the concept of literary discourse in his poetry.

Anything to due with mental health and addiction is an extremely popular subject in popular fiction, poetry, and film. What’s the purpose of people writing about that? To serve up your personal misery for the consumption of others? To get back at all the people who have done you wrong in life? To win awards and make yourself famous? I’m not really interested in any of those things. In cognitive behavioral therapy—the therapy that’s in vogue right now—the whole concept of it is based on that if you change your behavior you change your thinking, as opposed to the other way around. To my way of thinking, if you alter the literary discourse you can effect change in peoples thinking. You don’t simply reproduce the modes of thinking that got you sick in the first place. Maybe it’s a bit like the playwright Brecht and his alienation acting techniques. It puts a critical distance between the audience and the viewer, or in my case, the reader.

Because I suffer from mental confusion and have a limited attention span, I decided to turn this weakness into a strength. I thought the various styles and modes of representation really reflected the wild emotions and thought patterns one has when in the hospital. So there was some strategy that sort of grew out of my own organic way of thinking and behaving. I wanted to combine more disconnected poems like “-CIDE” with a traditional lyrical love poem like “Kingsley.”

In The Hospital Poems, I reproduce a questionnaire that was given to me when I was in the hospital. I showed it to Margaret Christakos—without her help I never would have written this collection—and she thought the questions were bizarre. I distinctly remember her saying “who thinks of themselves in these terms?” That had never occurred to me. I began to think of the hospital as some type of parallel universe and my life has been so greatly influenced by it. The slim identity I had at that point was greatly defined by other people, namely doctors and nurses.

I have an unusual writing style. I take as much influence from other discourses as I do from the poetic discourse. This includes the visual arts, theatre (particularly Sam Sheppard), and psychology. I was also blessed with the teachers at university who had a wide range of interests. Ray Ellenwood, who’s remained my friend till this day, knows more about Quebec literature, art and the avant-garde than anyone in Canada. Through him I’ve been introduced to literary works that students coming off the MFA assembly line of creative writing will never read.

AL: What is the significance of the titles in your work, both for the individual poems and the sections?

RA: It was Victor Coleman who came up with the idea to divide the work in chapters. I think it works well to organize the work into different idea groups. “Word/Ward” contains the most unconventional styles. The poem “-CIDE:” suicide? genocide? The section also contains the poem “Verse Two.” It’s a rewrite of verse two of Genesis. The section features the breakdown of language, which is what happened to me when things got so bad. You’ll often hear some writers say they don’t write by engaging theory. But if you believe language can accurately represent reality, then that too is a theory.

The chapter “Plato’s Ward,” featuring the poem of the same name, is a reference to Plato’s cave. It’s about never knowing what exists on the ‘outside.’ Is there a higher reality?

“She was Born in Spring” is a chapter written about a young patient at the hospital with me. It sort of represents the impossibility of the relationship. And it became impossible.

“Life Sentence” references a book by Eli Mandel. It plays on the double meaning of being a writer and being trapped, sentenced for life. It contains “Night of Psychosis.” I was writing down my thoughts on a small pad of paper and 4 of these are reproduced here. I would be taken to Emergency a few hours later.

In the chapter “Rumours of the Black Sea Rising:” I tackle people that tend to gossip a lot in the poetry and art scene. Most of it has about 5 percent truth in what’s being said. The poem “Days of Betrayal,” confronts the way I feel a lot in my life, being betrayed by people. I include in this poem the various codes for psychological diagnosis I’ve received. Most of which come and go and are always changing.

In the chapter “Romancing Rimbaud’ and, yes, he’s my favourite poet of all time, I include the poems written in a surrealist mode, with the most mercurial imagery. What doesn’t make sense always makes sense to me.

In “The Apothecary Comes” are the final poems I wrote in the series. The image seems to represent the end to me. Again written in a somewhat different style.

AL: I found this collection of works to be very impactful from a personal perspective, what is it that you want other readers to take away from The Hospital Poems?

RA: I’m glad to hear this. That’s what it’s all about for me. This may sound widely naïve and optimistic, but I’d really like to reach an audience. I think of myself as an artist in a society that doesn’t really recognize artists anymore. People love entertainment, spectacle, and fashion. But art? Not so much. But there can still be a role for the artist in my opinion. And as an artist, I want to inspire people. What else can you do for someone?

The Hospital Poems is available for purchase on its own here or as a part of our Summer Chapbook Bundle.

Robert Anderson is a poet, art writer, and photographic artist. He holds a BFA and MA from York University. His award-winning photography has been widely exhibited in Toronto. His poetry has been published in Rampike, BafterC, and House Organ. His art reviews can be seen on Canadian Art Online and Fjords Review. His first book represents a long journey and he has been helped by many people along the way.

Amy Loyst is an avid reader and book lover from Pickering, Ontario. She holds a BAH in English  Literature from Queen’s University and is currently completing her MA in the Literatures of Modernity at  Ryerson.