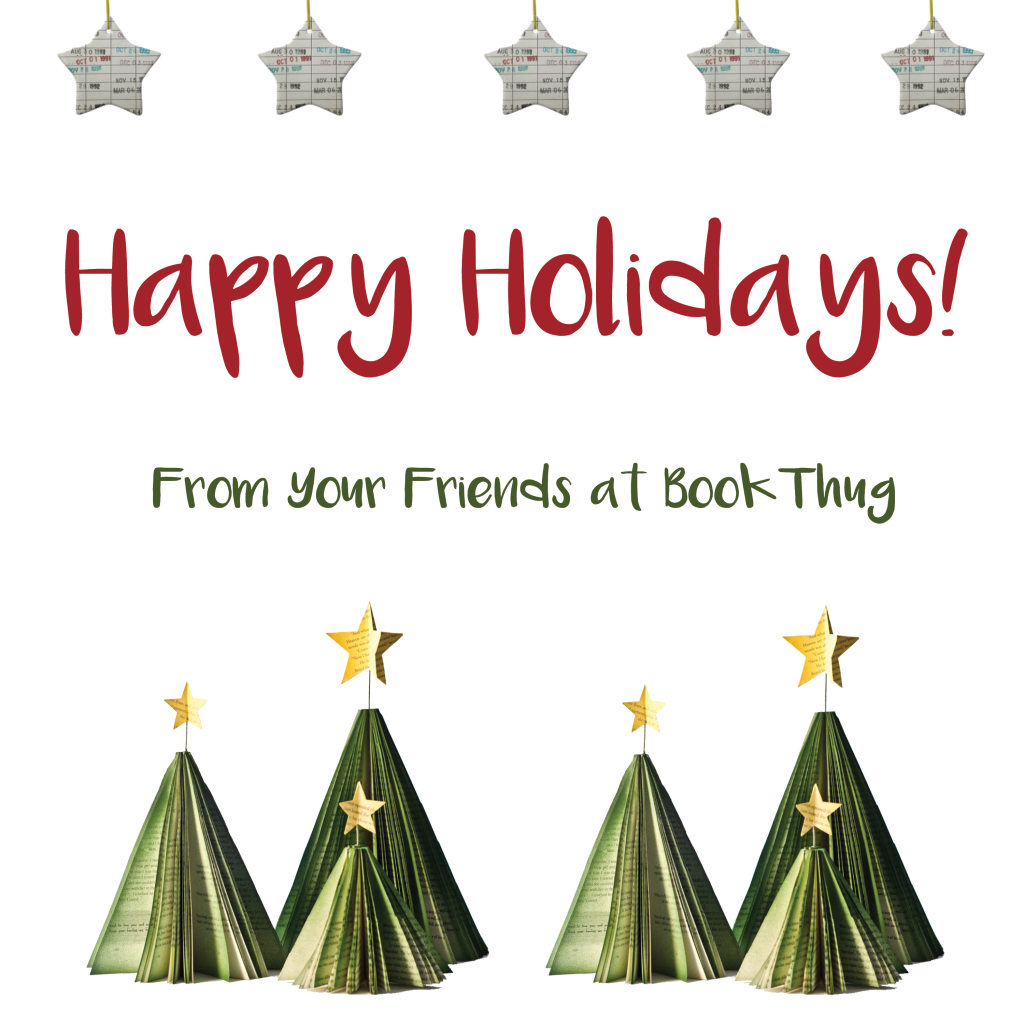 Happy Holidays to all you good little BookThug boys and girls out there! From all of us at here at BookThug HQ, we hope that your holidays are merry and bright, and filled with friends, family and books!

As a special treat, here’s a new poem from Pearl Pirie, author of the pet radish, shrunken, that celebrates Christmas and all things CanLit. Try and see how many poets you know who make an appearance. Enjoy!

Twas the night before CanLit Christmas by Pearl Pirie

The night before Christmas, all through the nation
Not a poet was paid cash, not even at this station.
Poet stockings were hung over their sofas with hope,
For Nelson Ball or Ann Carson, not soap-on-a-rope.

Thammavongsa was lodged deep in her albums,
michael e casteels was musing vispo amalgams.
Catherine Owen was at a riverside photoshoot,
While Rita Wong was out foraging our national roots.

Some writers were staring, tense in their beds,
While metaphors of death pranced thru their heads.
Amber Dawn in her ‘tats, and Bök in his promo beret,
opened their books, and sipped pumpkin lattés.

Erin Mouré was translating more poems by Chus,
While Monty Reid rosined his strings, then his shoes.
Liz Howard stayed tight in her shaking tent.
Lorna Crozier was out of country, at an event.

What was that sound? Lynn Crosbie channeled dread.
Across the country Chase barked, Faiers tilted his head.
Dave O’Meara couldn’t hear it over a patron’s news
And Domanski was out in the bush chasing a muse.

But out in the CanLit scene there rose such a firecracker,
Quill & Quire turned their opera glasses to the matter.
Running from the window, John B Lee was The Flash.
Humming, beaulieu stencilled the dog, the shutters then did the sash.

Karen Solie looked up from her road, past tractor hill.
Jenna Butler paused planning where to plant and till.
NourbeSe Philip heard a suicide, but not that noise.
Ben Ladouceur was distracted by all the pretty boys.

While McGimpsey played his I love noodles card,
The cacophony grew louder and louder out in the yard.
And what to my wondering eyes should appear,
But an access paycheck, pulled by nine clever reindeer.

With a magic carpet rider, so lively and quick,
I knew in a moment, it must be… A.F. Moritz.
More rapid than submissions or applications they came,
And he whispered, and rumbled, and called them by name:

“Now Dempster! now, Christakos! now, Bowering and Mooney!
On, mclennan and Brossard! Howell, Dumont and Connelly!
To the top of the Parliament! To the top of the field!
Now’s holidays! Holidays!! But you’re all strong as steel!”

As Carter brandished scissors as haiku’s sentry
There began to build an interesting energy.
What it was, I wasn’t sure…but it had to be good
Like a Vancouver Conference in my very own hood.

As I drew out my phone, and was loading Instagram,
Through the window A.F. Moritz came with a…gall dang.
He was dressed all in wool, from his suit to his slippers,
And his clothes were all burnished with toner and glitter.

With photocopied chapbooks saddled on his hip
As an antlered Yann Martel one gave reading tips.
Poem broadsheets were falling like so much fresh snow.
It was Rudolph mclennan tossing them from the cargo.

Their eyes—how they twinkled! Their giggles, how merry!
Their cheeks were like so…cheeky, noses like… for expediency, let’s stick with “cherries”!
Stuck out of Moritz’s pocket was a PoetSeries bandana.
mclennan’s wry little mouth was drawn up like a Santa’s.

They spoke not a word, but went straight to their work,
And joined in the vowels of Wayde Compton, and blerrrrks
of Paul Dutton. Sandra Ridley slipped in as the fifth.
then McCaffrey and jw, McNair and Stephen Ross Smith.

The rest of the reindeer soon circled like a wreath
And learned new ways to vibrate their teeth.
Folks texted out, poets flooded in. Shauntay Grant,
Burdick, Wells, Priske, Brockwell and Di Brandt…

A wink from Fred Wah and a nod of his head,
Soon gave all to know we had nothing to fret;
As a group with passion attracts more of the same
Soon onlookers and curious joined in the the game.

Judith Copithorne clapped to the happy din.
Mia Morgan finger-snapped. The next improv kicked in.
Overtones crescendoed, a wall of sound was evaded.
The sounds swelled and softened and finally abated.

Even the angels took notes on how the sounds layered.
If you missed it, you missed it — you had to be there.
Leaping back to the carpet, (bought with OAC grants)
Moritz said we should do this each year, if we get a chance.

Turning down the idea, all agreed the one time was fun.
They drifted off in dribs and drabs, in bits of bodily hum.
They left not a book but as they disappeared from sight,
I heard someone call “Happy Christmas to all, and to all a good-night!”

A note from the author: “Twas the Night Before Christmas was previously believed to be authored by Clement Clarke Moore, I give thanks to Major Henry Livingston Jr. (1748-1828) who Don Foster traced the poem to in Author Unknown: On the Trail of Anonymous.”

Pearl Pirie is the author of been shed bore (2010), Thirsts (2011), which won the Robert Kroetsch Award for Innovative Poetry, and the pet radish, shrunken (2015). Her poetry has been published in numerous literary journals, including filling Station, Bafter C, Arc Poetry Magazine, Gusts, PRECIPICe, Dandelion, and This Magazine. Her poem “Summer Names” was shortlisted in the Best Canadian Poetry, 2014, and she made the 50-poem longlist for Best Canadian Poetry, 2011, for her poem “The First Mother’s Day After Dad’s Death.” (Tightrope Books). Pirie’s work has been included in several anthologies, focused on innovative poets, haiku, and other genres of writing. She has several chapbooks produced in Canada, France and Japan. She has produced two dozen titles under phafours press. Since 2009 she has managed the Tree Seed Workshop Series. the pet radish, shrunken is her third full-length book of poetry. Connect with Pearl on her website, www.pearlpirie.com, her poetry and poetics blog, http://pagehalffull.com/pesbo, or on Twitter @pesbo.